Yesterday, we talked about the Mariners playing for pride in the middle of August. A month and a half earlier, they were doing much the same thing, and, for a time, they were doing it equally well. The M's hit a local minimum on June 15th, when a loss to the Cardinals dropped them to 24-41. However, they then went on to win nine of their next 12 games, including a sweep of the visiting Reds that saw the M's pitching staff allow all of one single run. The team began July with a 33-44 record, and while 33-44 isn't a good record, or even close to being a good record, it also isn't embarrassing. It's right on the border of respectability.

July got started with a 4-2 loss to the Yankees. No matter; the M's had taken the first two of the series, and there's no shame in losing by two in New York when you throw Ryan Rowland-Smith up against CC Sabathia. The team flew to Detroit that evening looking to sustain its recent good play. Set to face Max Scherzer on a Friday night, the M's were at a disadvantage, but with Doug Fister taking the mound on their behalf, the odds weren't impossible. This was a winnable game, and, lately, the M's had been winning a lot of winnable games.

Unfortunately for them, the game didn't start out so well. Though a Franklin Gutierrez home run in the top of the second established an early lead, Fister immediately gave it back and then some, allowing a two-run double to Don Kelly and a two-run single to Austin Jackson in the bottom half to put the Tigers up 4-1. That's where the score remained into the bottom of the fifth, when the Tigers would tack on one more.

Behind 5-1, Fister was replaced by Chad Cordero, and while Cordero kept the Tigers off the board, Scherzer stayed strong, and it was still a 5-1 game in the bottom of the seventh. It was then that the Mariners had their sixth-most unremarkable moment of the 2010 season. Sean White came in to relieve Cordero to start the inning and put one on with one out. Johnny Damon stepped up to the plate as Ramon Santiago took his lead off first base, and after White came set, he threw over to the bag. Santiago took a few steps back, and Russell Branyan returned the ball to the mound. 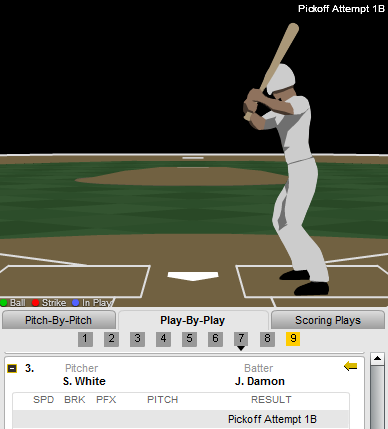 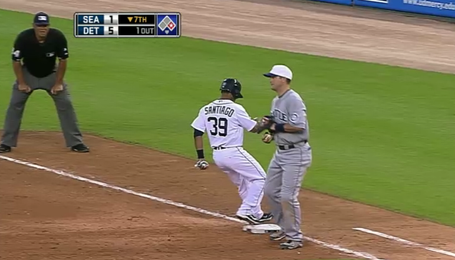