By the middle of August, the Mariners were a forgotten team. On a national scale, and, to a great extent, on a local scale as well. During a miserable, go-nowhere season, August is always the worst month of the year, and Felix wasn't enough to keep people interested. While I can't pull out any numbers, a very significant fraction of M's fans made the conscious decision to tune them out and focus on other things that didn't feel so pointless and dull. Summer sunshine doesn't last forever.

The Mariners woke up one August 15th morning in Cleveland with a 46-71 record, five games ahead of the league-worst Orioles. However, while a lot of fans had jumped ship, the Mariners had to keep playing, and the team was actually on a bit of a roll. They were winners of five of their last six games, having beat the Royals and A's and having taken the first two of a three-game set against the Indians. Playing for pride always sounds like loser talk, but pride really is worth playing for when there's nothing else to gain. It's important for professionals to be able to take pride in their work, and at the time, the Mariners were doing so, preparing to try for a three-game road sweep.

However, the Sunday matinee to close the set didn't go very well. The M's couldn't get anything going against Justin Masterson, and while Felix Hernandez kept the game scoreless into the bottom of the seventh, an error by Chone Figgins opened the floodgates, and within minutes, the Indians had stormed out to a 7-0 lead, and Felix had been replaced by Sean White. The sweep dream was over, and as the game shifted to the top of the eighth, the only thing left to do was battle.

Ichiro grounded out on three pitches, and then Chone Figgins whiffed on four pitches for the second out of the inning. Russell Branyan, though, subsequently drew a four-pitch walk, and it was then that the Mariners had their seventh-most unremarkable moment of the 2010 season. With two down, a man on first, and a 1-0 count in a 7-0 ballgame, Jose Lopez took a low fastball from Rafael Perez for a strike. Catcher Lou Marson returned the ball to the mound so as to continue the at bat. 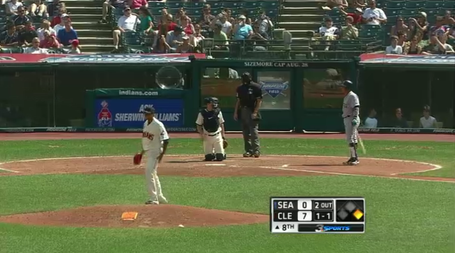 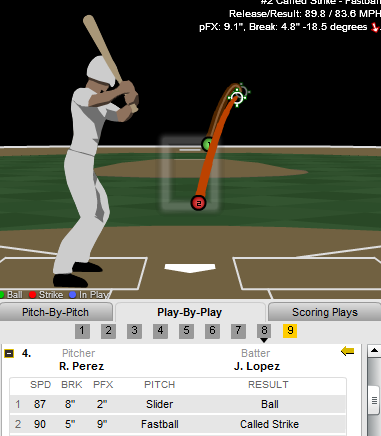