At the beginning of August, the Mariners and Twins were headed in two very different directions. The M's had lost six games in a row to drop to a season-worst 27 games below .500. The Twins, meanwhile, had won seven in a row to pull to within a half-game of the AL Central division lead. The M's were old toast, and the Twins had new life as they set their sights on a playoff run.

That was the context of the August 1st matinee showdown at Target Field between the two teams, which saw Luke French go up against dominant young lefty Francisco Liriano. Both Justin Morneau and Joe Mauer were absent from the Minnesota lineup, but even so, they had a great advantage.

Liriano, unsurprisingly, was able to keep the M's off the board, striking out the side in both the second and fourth innings. But French, for his part, was also able to pitch well for a while against a depleted lineup, keeping the Twins scoreless into the fourth. It was then that the Mariners had their ninth-most unremarkable moment of the 2010 season.

The score was 0-0, and following a Michael Cuddyer double play, DH Jason Kubel came to the plate with two outs and none on. Behind in the count 0-1, Kubel got a high-inside fastball at 89 miles per hour, swung, and fouled it back off the screen. 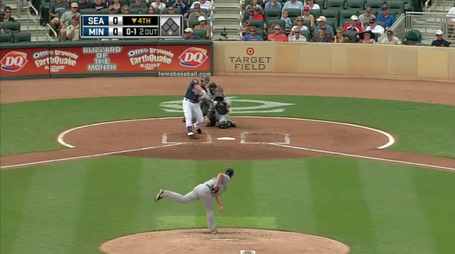 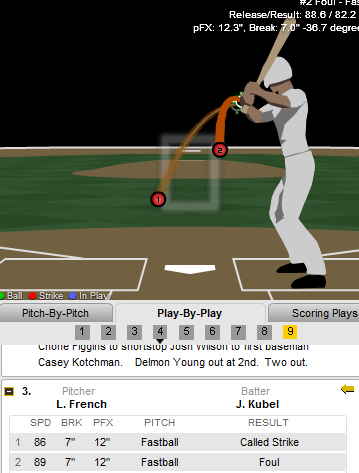