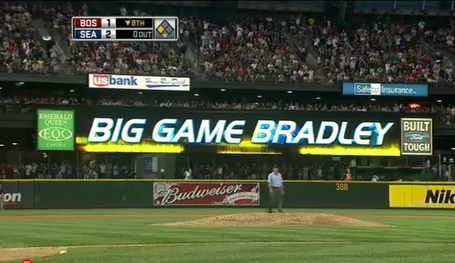 It sounds silly now that everything's done and we know how it went, but there was a time at which this wasn't so ridiculous.

Forget Milton Bradley's injuries. Forget his psychological issues, and his eight dingers, and his .205 average. Early in the season - very early - he was showing some promise. He first homered in the third game of the year, putting the M's in the lead. Less than a week later, he hit a mammoth three-run homer, snapping a scoreless tie in the bottom of the eighth. The next day, he ripped a two-run single that erased a 2-0 deficit.

He followed that by batting .313 over his next ten games. And it was around that first turn of the calendar that I think most of us figured this was going to work out. Bradley had a home run taken away by Rajai Davis in center field in one of those early Oakland games. I remember thinking, okay, add that homer into his line and his numbers look pretty good. The power was there. The discipline was there. The attitude wasn't there, very much. The Mariners had rolled the dice on Bradley, and for about the first month, it looked like it was going to pay off.

A few days after that ten-game hot streak, of course, Bradley left a game in progress and asked for personal counseling. After he came back, he batted .201 the rest of the way before his season was ended by injuries. Milton Bradley's 2010 most certainly didn't have a happy ending.

But I recall sitting in Deschutes one April evening, eating dinner while watching Brett Anderson and Doug Fister trade zeroes on the TV suspended above, and Bradley came up against Brad Ziegler in relief and launched a ball out of the park to deep right field. I half-screamed - one of those screams you begin and cut short when you realize you're throwing your arms up in a crowded restaurant - and, at that moment, I was certain that Bradley had arrived. I was certain that he'd just had his Mike Cameron leaping catch, or his Franklin Gutierrez diving catch, or his Ichiro throw, or what have you.

Bradley was interviewed in the dugout during the postgame show and flashed a smile to the camera. Big Game Bradley - one April evening, I believed it.