Share All sharing options for: The AL West, updated

There's been some roster changes across all the teams though as you'll see, nothing too major. Still, I thought it was about time to update the projected 2010 starters and standings. This time with snazzier fonts!

Again, these are just my projections. This is a gross estimation. I am nowhere near as knowledgeable about those teams as I am about the Mariners and thus projecting depth charts was a lot tougher. That being said, most of the fringey decisions (is Macier Izturis or Brandon Wood the starter at 3B for the Angels?) do not represent much variance in terms of projected production. When I wasn't sure, I defaulted to the player with the better projection.

If you have a bone to pick with any of them, feel free to do in the comments. If you do it politely, I will listen. 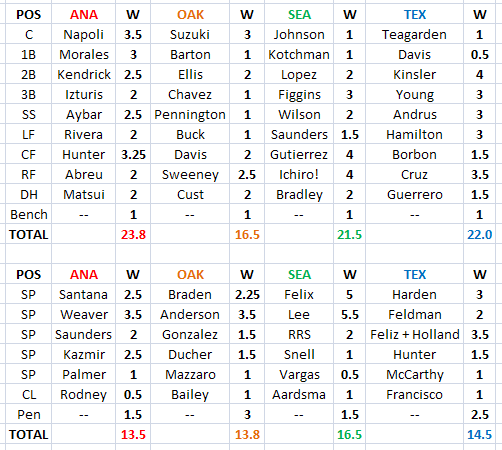 This post assumes the Vladimir Guerrero - Rangers deal gets done.

Saunders in LF is likely just a placeholder for now, but I don't expect much improvement there. Obviously the best bet the Mariners have right now is to replace Vargas with a high-upside SP.

I wouldn't put much stock in the differences between ANA, SEA and TEX. My projections are too rough and too rounded to really have a single win mean much over an entire team. This is meant to be a general picture.