First off I'd like to thank everybody for coming here recently in what has proven to be a most difficult time for myself and my loved ones.  Your unwavering support and kind words have no doubt made the past couple of days a little easier to cope with.

As you all know by now, Adrian Beltre is not only my favourite (Hi Graham) Mariner of all time, but he is my favorite athlete of all time.  The last 4 years have been truly remarkable for me as it was the first time I have ever been able to watch my favorite player play for my favorite team, which in turn, happened to be the only home town team I've really cared about.  For me, just because you live in a city with sports teams, that doesn't mean that you have to like them.  The planets aligned that fateful day when Mr. Beltre signed his contract with the Mariners.  So I did what any other perfectly normal person would do, I packed my bags, kissed my mother and girlfriend goodbye (Shannon would obviously join me a little later) and headed to Seattle!

As if getting to watch Adrian wasn't good enough, I soon found out that the GM of my place of employment has been a season ticket holder for years and had 4 seats only 5 rows behind the Mariner dugout.  A small twist of fate one day led to the GM and I bumping into each other in the hall and having a quick chat about baseball.  A couple of days later he offered me a set of tickets, and as they say, the rest is history.

It started with an innocent sign that confessed my undying non-sexual admiration for Adrian. He would always greet it with a nod and smile, even if it got him an innocent ribbing from his teammates.  If that would have been it, that would have been enough for me.  Athletes these days tend to barely recognize the fans that file through the gates to watch them compete in a game we all wish we could play.  One late night after a game Shannon surprised me with what would turn out to be the second greatest gift of all time, a 3 foot tall Adrian Beltre bobblehead!  Just a couple of short months later I built up the courage to toe that fine line of dedicated fan and creepy Robert DeNiro type fan by bringing the bobblehead to a game and giving it its own seat.  As the players came up to the steps, they noticed my friend immediately and started laughing.  First Washburn, then Vidro, and before I knew it, Adrian stepped out and saw what the commotion was about.  He looked at me and shook his head and smiled the smile that we all grew to love.  Once again he was a great sport about it and took everything in stride.  At that point I was happy that I wasn't being viewed as the creepy fan.  Again, if that was it, it would have made my season.  Little did I know what events were about to transpire.

As the game wore on it seemed like any other ordinary night.  I was chatting with some people a couple of rows behind me and all of a sudden I got a tap on the shoulder.  Much to my surprise, Adrian had signed a bat he was using that night and inscribed it "to my #1 fan".  Now obviously this was the greatest gift that I could EVER receive!  To be perfectly honest, I had to use all my willpower to not cry like a excited little schoolgirl.  As the warm fuzzies ran through my body for the next couple of hours, the Mariners would come back to win in an incredible game which in turn would be the greatest night of my life thus far. Even after that night, up to the final game of the 2009 season, whenever he saw me in the crowd, he would give the familiar head nod and cap tip that from the start would have been enough.

Like I said earlier, athletes just don't do things like that much anymore.  I think that what makes him so darn likable is that he's human and isn't afraid to show it.  In turn, that's what also makes the recent events of his departure that much more difficult.  It's safe to say we all knew this day would come.  Why would he stay in a park that crippled his numbers?  Why would he continue to play in a city where the majority of the fans don't appreciate his skill set?  The only reason most fans knew he was an incredible defender was because he won Gold Gloves, which we all know doesn't mean much.  I guess I can't blame Adrian for leaving Seattle. I was just hoping that he wouldn't.

Now he's off to Boston and the team that I hate the most.  There were only two teams I was hoping he wouldn't sign with, the other being LAA of course.  He moves from the enormous confines of Safeco Field to the cozy short porch at Fenway Park.  It could be feast or famine for him in Boston though.  If he gets off to the start like he did here in Seattle, he's in trouble.  But if he succeeds like most of us believe he will, than he will be loved throughout the city and be a great addition to an already great team.

I will always cheer for Adrian, regardless of the uniform he is wearing.  I cheered for him when he was a Dodger, and I'll cheer for him as a member of the Red Sox.  I will not however, be rooting for his team.  It would be against my every moral fiber to muster a cheer for the Red Sox.  If they win, I will be happy for Adrian, not the Red Sox.

I would be remiss by not mentioning that Adrian has indirectly introduced me to some of the coolest, most awesome people I will ever meet.  Of course I'm talking about the community here at Lookout Landing.  It started with Bretticus and Etown and branched out from there.  I was introduced to Jeff, Matty Poo (Matthew), Graham, Robert, Eric, Laura, Kirsten, and the list goes on and on.  Hell, I even got a chance encounter with the elusive Coach Owens!  Adrian doesn't know this and probably never will, but he introduced me to a great group of people who I will continue to stay in touch with even if he is gone.  Thank you Adrian!

Many people have asked me if I will get a Red Sox jersey. Some have told me they hope I don't get a jersey.  This is only the first of what I'm sure is going to be many difficult decisions that will tear at my every emotion as the days pass on and the season draws closer.  This one is clear though, I will be getting an Adrian Beltre Red Sox jersey.  I know some of you will be disappointed but he is my favorite athlete of all time no matter the uniform he is wearing.  I will see it as an Adrian Beltre jersey, not a Red Sox jersey.

These last few days have been trying.  At first it was like what I imagine being punched in the gut by Mike Tyson AND Kimbo Slice feels like (yes, that bad)!  After the initial shock, I thought I was okay.  The next day however, was a little worse.  It was like broken ribs and internal bleeding, and every time somebody would see me at work and want to talk about it, it's like I was being punched again.  Hopefully the saying is true and time does heal all wounds because I don't want to feel like this anymore.

I know the start of the new season will re-trigger these emotions just as I am starting to forget about them.  And about the time I get over those emotions...again, the Red Sox will come to town and stir everything up again.  I always said the Red Sox were like herpes but I didn't know just how right I was.  Just when you think everything is gonna be okay and you can forget about the past, BAM!!! They flare up again!

I will ALWAYS love the Mariners and I will ALWAYS love baseball, but with the experiences and and interactions I've had over the past few seasons, the 2010 season will be a bit lacking for me.  I will still be enthusiastic and root for the Mariners like crazy, but without Adrian in that uniform, I have no one to bring out the happy ass retard in me.  It's nothing personal, it's just that you cant pick and choose people that bring out those emotions in you. It just happens.  Over time I imagine I will find a new favorite Mariner, but nobody will ever replace the great Adrian Beltre.

Thank you for everything you crazy bastard!  You will be missed by myself and the fans in Seattle who actually know something about baseball.  Godspeed to you Mr. Beltre, we wish you nothing but the best for the rest of your hopefully lengthy career. 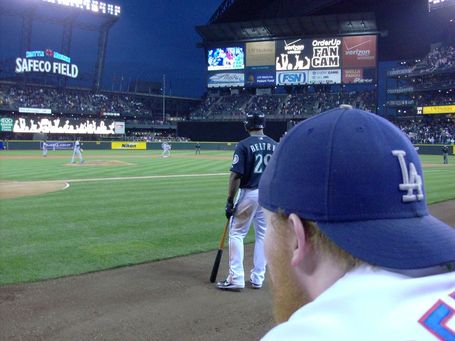 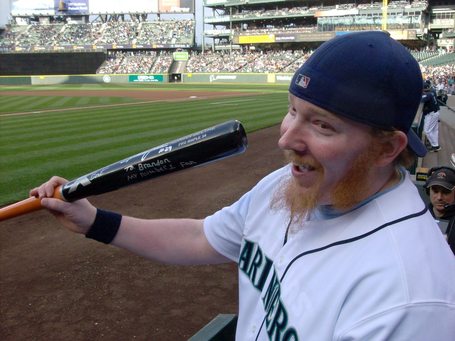 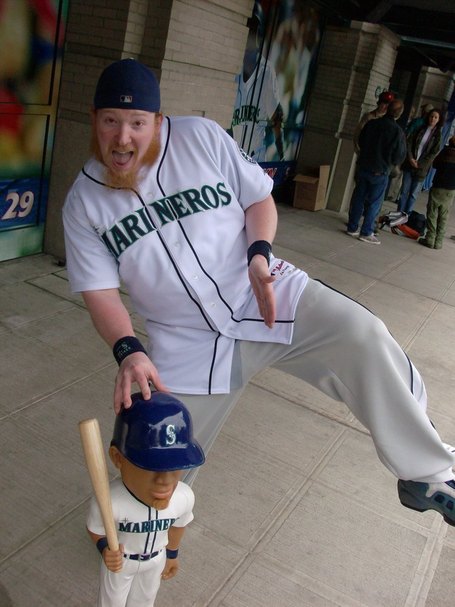 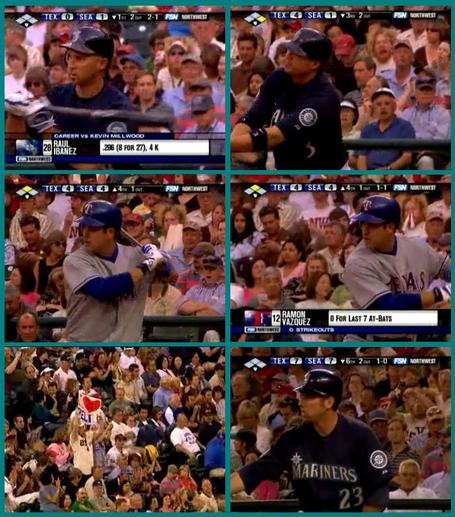 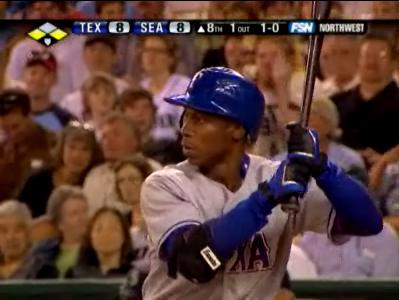 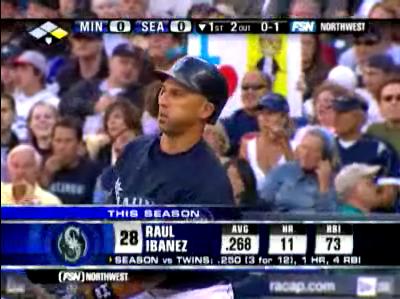 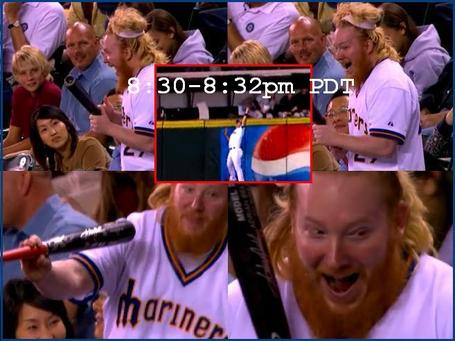 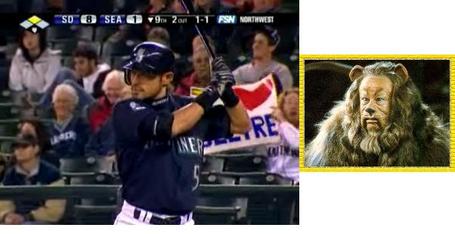 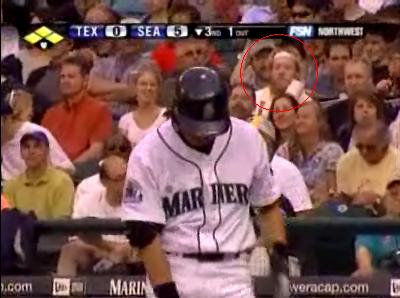 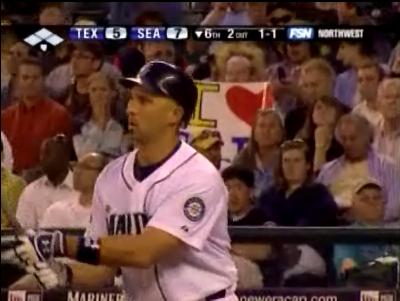 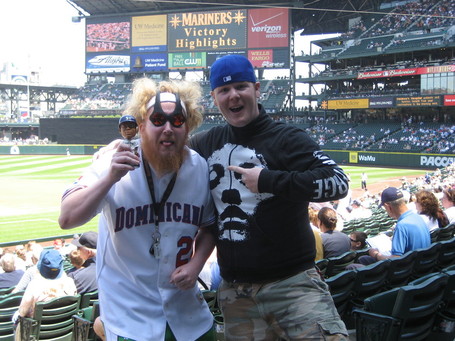 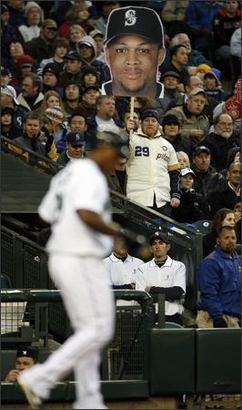