Playoff Odds & The Value Of Volatility

Share All sharing options for: Playoff Odds & The Value Of Volatility

Given the sheer quantity of high-risk/high-reward pitchers on the market this winter, there's been quite a bit of discussion regarding whether it's better to sign perceived consistency or volatility. I'm not feeling very creative at the moment, so something something something here's a link to Athletics Nation. The highlight of that thread is the following chart: 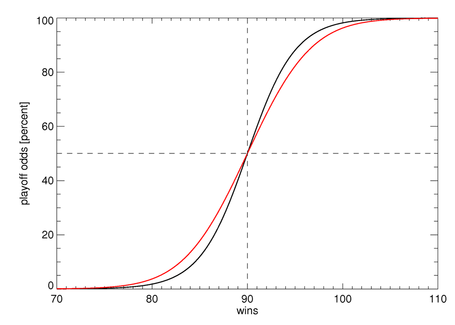 You'll want to pay attention to the red curve. This curve is showing a team's calculated odds of making the playoffs versus the same team's number of Pythagorean wins. It's a logistic curve, which, when you think about it, is to be expected - we would assume that the impact of a single additional win on playoff odds starts low, gets bigger, gets huge, and then gets smaller again as we move from 0 towards 162. This is why the marginal value of an extra win through player acquisition is bigger right now for the Mariners than it is for, say, Kansas City. That extra win means a ton for the M's, because they're (projected to be) hanging out right around where the slope is the steepest.

Where this gets fun is in plugging in hypothetical examples. For example, consider one question the M's may have faced recently: Jarrod Washburn or Ben Sheets?

If Washburn represented a 1-win improvement 100% of the time, his impact would be +6%.

As any idiot can tell, this is far from definitive. The playoff odds shown in the chart are averages and in no way take into account different divisions, and we also have no way of predicting the likelihood of different-WAR seasons for different players. It's all theory and guesswork. But what's neat is that it doesn't require much of a leap to uncover the take-home message that, generally speaking, ~.500-ish teams should err towards volatility, while 90+ win teams should err towards consistency. Look at the A's. Let's say the A's were, I dunno, an 80-win team pre-Sheets. Now, Sheets might blow up and contribute zero value, but the longer he stays healthy and the more value he provides, the higher the team climbs on that curve, at an accelerated pace. Sheets gives them a chance, and even if he doesn't work out, it's not that big of a deal, because the team was unlikely to go anywhere anyway. In that regard, he's a good risk. A better risk than he might've been for a division favorite.

I dunno. It's a fun chart, and also an intuitive one, meaning it doesn't exactly tell us anything we didn't already know. But it's nice to have a visual. And yes, I suppose I should take this opportunity to state that, while Washburn isn't the sort of pitcher I want to add, he would definitely help, as we are right in that area where every win is important. I don't really want the M's to go that route, but I can see why they would.