Felix Contract Details & The State Of The Payroll

Share All sharing options for: Felix Contract Details & The State Of The Payroll

IMPORTANT UPDATE! According to Geoff Baker, the 'Silva' cost is actually $3.5m in 2010 and $5.5m in 2011, which would give us another $2m of flexibility over what is projected here.

Saw this on Twitter first, but since I have this Pravda link handy:

There are also some award bonuses, where Felix earns $1m for winning the Cy Young, $500k for coming in second, and $250k for coming in third. Now here there's a little uncertainty. Cot's is saying those would be one-time awards, but what I'm being told is that this may instead be similar to the old JJ contract, where all future salaries increase by the amount of the award. So, for example, if Felix were to win the Cy Young next season, it would be worth $5m, not $1m. But I'm not sure. This is just something to keep in mind until we find out.

Anyway, signing bonuses tend to be spread out over the course of a deal, so what's most important right now is that, for 2010 and 2011, we can probably pencil Felix in to make $7.2m and $10.7-11.7m. That seem low to anyone else? Remember that previous estimates put him around $10m and $15m in the same two years. In the short term, this is tremendous. The Mariners have found a way to get Felix paid while, in a way, actually saving money relative to what was expected. Unless I'm missing something, this means the M's have about $2.8m of extra offseason wiggle room that I didn't think they'd have. Maybe we have room for Sheets after all. (It's also a big boost in 2011.)

So where do we stand in payroll terms? Here's my best attempt at getting everything figured out: 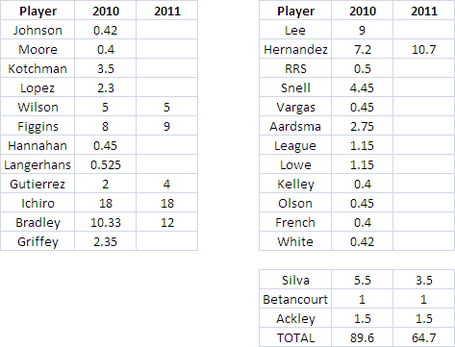 I made some educated Kotchman/League arbitration guesses, and also had to guess with a lot of the $400-500k numbers, but this should be close. Remember that last year the Mariners had an Opening Day payroll of $98.9m. If you assume a similar budget in 2010, that would leave the team with about $9m left to spend, which exceeds my off-the-cuff estimate of $4-5m.

That's...that's really interesting is what that is. Obviously we can't know what the 2010 budget might be, and we can't know how the team factors in things like performance and award and signing bonuses, but barring some surprise, the Mariners have flexibility. Ben Sheets is out there. Erik Bedard is out there. Some interesting hitters are out there. We know the M's still have to add at least one more piece, and we know that they'd also like to add a pitcher. And based on the table above, it turns out they have a little more to work with towards those ends than I thought they did.