It's no secret that Safeco Field is a pitcher's park. While its dimensions aren't that impressive, it lies at sea level and boasts a fairly mild temperature, both of which deaden the air. Previous studies have shown that Safeco will reduce runs by 5% and home runs by roughly the same amount, which leads to the conclusion that power will find itself at a disadvantage in Seattle.

This is not entirely true.

The prevailing wind in Seattle is a northwesterly off Puget Sound. In terms of the ballpark, this means that the wind comes in from left field and blows towards the right field foul pole. We all know it's easier to hit with the wind than into it, and so we understand that right handed hitters are going to have more problems hitting home runs than left handers*. The key, of course is to know by how much. Does Safeco actually inflate left handed power? If so, left handed power bats are far more valuable than a right handed bat with the same power - they perform in the same lower run environment but simultaneously have their own output boosted compared to average.

Tackling this problem is a fairly tricky process. I could have looked at home run distribution in Safeco Field vs. league average over the past several years and made an attempt to correct for bias in the Mariners roster, but fortunately I didn't have to. The work has already been done (albeit in a completely different way) by HitTracker's Greg Rybarczyk (here). I have taken his work and modified it slightly in order to give a graphical output of Safeco's equivalent fence distance below**: 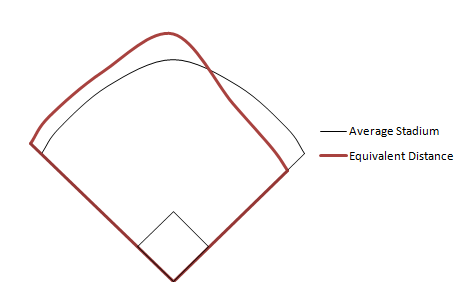 I scaled the difference between Safeco and league average by two so it's easier to see, but I think that the graphic is fairly instructive. Left-handed bats get a significant advantage to playing in Safeco, while righties get killed. I wouldn't take the above as 100% accurate (it's a smoothed line between five datum points), but it's close enough to give us the overall picture. Left field is a pain to hit to, LCF is really hard to hit the ball out of, and centre field is a canyon of death (the equivalent distance to centre is over 420 feet). Richie Sexson's time with us just got a lot more impressive.

*At this point I should note that Safeco Field's dimensions decrease home runs between the left field foul pole and right-centre field and increase them to RCF and right field proper without the effect of wind.

**Assuming that distance and energy input into a baseball are quadratically related (which isn't true, but it's close enough) and by using wind speeds that force Safeco to match the standard HR/FB factor, we can map out the fence distances that are equivalent to the increase/decrease in difficulty of hitting a home run in that area of the park.