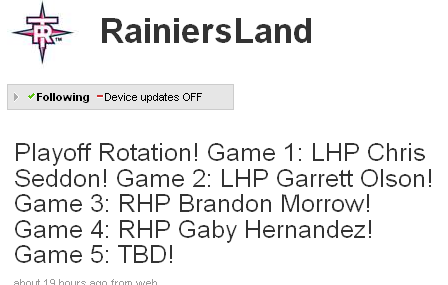 By the way, in case you haven't heard, the Rainiers made up a 7.5-game deficit in 17 days to win their division. In true 1995 Mariners fashion, they actually made it up in nine days, but then struggled against Salt Lake and had to pull themselves back up against Colorado Springs, who they knocked out of the lead on the final day of the regular season. Though Tacoma making the playoffs means little to us, that doesn't make what they did any less of a miraculous comeback, and given that a lot of those guys are never going to get much of a shot in the Majors, this is a pretty big deal for the team.

OC: I'm serious, Coxie. Why did you want to play college hockey?
Cox: Cause I love to play hockey. I want to go to the NHL just like everybody does.
OC: I wanted to win a national championship.

Perhaps what's funniest about the PCL Pacific North Division is that Salt Lake very nearly pulled off the improbable as well. Standings on the morning of 8/22:

From that point on, Tacoma went 13-4, Salt Lake went 12-5, and Colorado Springs went 5-11, losing a combined total of 14 games in the standings to its competition. That the Bees were able to gain 6.5 games in two and a half weeks didn't get them to the playoffs, but it's incredible nevertheless. Historically, the only comebacks that've attracted any attention are the comebacks that save a team's season, but if, say, the Orioles were to gain six on the Yankees in eight days, then holy crap. Tacoma gets the glory, but what Salt Lake did was almost as astonishing.