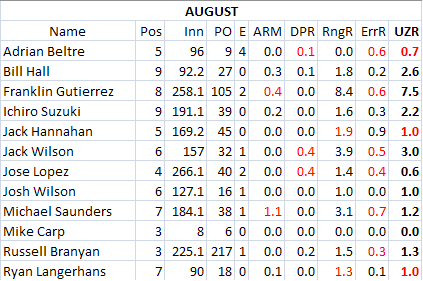 The Mariners didn't quite match the 22.3 UZR that they posted in July, but they still came right up to the 20 run mark in August, a feat almost more remarkable to have accomplished two months in succession.

Seriously, he's at about 4.5 WAR coming into September. Barring a collapse, he's going to be a five-win player. Adam Jones is at 2.0 WAR right now. Adam Jones plus Raul Ibanez are about 5.2. Gutierrez is amazing. Appreciate it more. You're not appreciating him hard enough!

Michael Saunders. He has range! He has... some difficulties at times, but the range is encouraging.

Griffey missed a good chunk of playing time this month, but still managed to smack out four home runs. He has not returned to 2007 form like some hoped, but he has avoided falling completely off a cliff and his willingness to platoon and stay off the field has kept him far from the worst case scenario that we imagined at the beginning of the season. He still isn't good, or useful in baseball terms, so if he wants to come back next year, I would likely only condone it if the role is as coach.

Wakamatsu said in his post game last night that Sweeney had been carrying this offense on his back. Um, no. He's a DH and he doesn't play often enough to do that, but he has been quite good thanks to seven extra base hits and six walks.

Russell Branyan's whiff rate rose above 40% :( Granted, that might have been tied to his increasingly painful back issue which sounds like it is going to sideline him for the remainder of the season. If so, I dearly hope he returns at a good price next season because he has been fun to watch and root for and hey, we have openings at DH and 1B!

Ichiro's contact rate plummeted, for him, this past month but it did nothing to damper his effectiveness. I will not believe that Ichiro can turn himself into a 25-homer guy when his speed goes until I see him do it, but if he does do it, I will be completely unsurprised.

Among our hitters this month, Mike Sweeney had the highest slugging percentage and Josh Wilson was second., the only two players to surpass the .500 mark. Oh and third was Jose Lopez, but he is at least a decent hitter.

There is no doubt in my mind that in a couple years when Dustin Ackley gets called up after just raking through the Minor Leagues, he will arrive in Seattle and promptly suck for three months. At least Michael Saunders does one thing and that's make the pitchers throw him strikes, as his swing% is the lowest of the whole team for August and his out of zone swing% is one of the lowest in baseball.

All told the offense was about 6.5 runs below average after park adjustment. That's not good, of course, but for our offense, coupled with our defense, it comes out to our position players being about 14 runs above average, which is certainly decent to good overall.