Share All sharing options for: My Mike Koplove Story 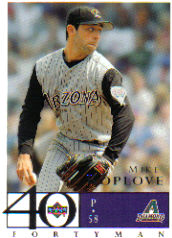 I didn't know a lot about baseball when I was 15. I thought Alex Rodriguez was the worst person in the world. I thought Jack Cust was a future MVP in the making. I thought John Stephens was going to change the way the world thought about pitching. I thought Mike Cameron was okay. I thought Darin Erstad was a flukey pile of crap. I thought Oakland was the model franchise, defense wasn't important, Gillick should've been more aggressive, and Bret Boone was clean. When was 15, I thought I knew everything about baseball there was to know, when in truth all I knew was message board speculation and what I'd parroted from my first ever volume of Baseball Prospectus.

However, as cocksure as I already was as a young teenager, of two things I had never been more certain in my entire life. As I watched the FOX game of the week one Saturday afternoon in September of 2001, I knew two things beyond any reasonable doubt:

The Diamondbacks brought in Koplove in the bottom of the 11th of a 5-3 game. They were leading the Dodgers by two in the game and four in the standings, and with only a couple weeks to go in the season, a win would all but push LA out of the picture. So this was a big assignment for the rookie Koplove, who inherited a runner on first and nobody out. And as he came to the mound and warmed up beside the FOX stat graphic, it hit me.

This has always been a thing with me. Even now, albeit to a lesser extent than when I was younger. When I hear about a guy for the first time, and I don't really know anything about his ability, I will evaluate him by his name. Some names just sound like successful baseball names, while others don't. Brian Lesher sounded successful. Robert Ramsay didn't. Justin Kaye sounded successful. Brian Sweeney didn't. Aquilino Lopez, Jeff Heaverlo, and Rafael Soriano sounded successful. John Halama, Brian Fitzgerald, and Jermaine Clark didn't. I don't know what it is that lends them these perceived characteristics, but some names sound like they throw really hard or hit for mammoth power while others sound all finessey and weak. This evaluation technique had led me astray in the past, but I didn't care. I was convinced that, if you just gave me a name, I could tell you whether or not he'd go on to have a good big league career.

Mike Koplove sounded promising. He sounded like he probably got a lot of strikeouts. So as he warmed up and the graphic showed a 0.00 ERA and a bunch of K's, I gave myself a mental pat on the back. Yeah, you knew it. I'd never heard about the guy until he warmed up in the 11th, but almost immediately I was sure that he'd go on to be an ace in relief. He had the sort of name you could chant or put on a jersey, a name so sharp you could prick your finger on it.

Then I watched him pitch. I don't remember exactly what I was thinking with each successive delivery; that was eight years and a lot of organic chemistry ago. But I do remember how bad he was. Via Baseball-Reference:

Koplove faced three batters and put all of them on, throwing four strikes out of 14 pitches and departing having walked in a run. Bob Brenly came out to take the ball and replace him with a guy twice his age, and Koplove slowly walked off the field to a rousing ovation from the Dodger faithful, head down and glove hanging loosely by his side. My girlfriend always feels really bad for players on TV who're losing or otherwise having a rough go of it; had she seen Koplove that afternoon, she might've wept. Pitchers aren't supposed to show a lot of emotion when they get pulled from a game, and certainly not as a visitor when they might elicit a response from the crowd, but through his body language, Koplove looked defeated. You could read him like a diary.

Morgan came in and almost immediately gave up a game-winning single to Adrian Beltre. And as the Dodgers celebrated around home plate, for a brief moment the camera cut to the Arizona dugout, where Koplove was leaning forward with his arms in his lap, staring at the field. That's when I knew that it wasn't in the cards. The whole baseball thing. I guess I fancied myself some sort of really perceptive sports psychologist, but as I watched Koplove reflect on how he had personally cost his team an important win in the standings, I put myself in his shoes and decided that, no, it wasn't possible to recover from something like this. Koplove had buckled under the pressure as a rookie in a pennant race, and because of that he'd never again have the trust of his teammates, his manager, or even himself. Subsequent opportunities would only bring flashbacks, and flashbacks would only bring failure. On a Saturday afternoon in 2001, I was positive that I'd watched the promise of a 24 year old's Major League career disappear over the span of three batters.

I didn't think about Mike Koplove again for another eight years. Lots of people didn't. He did stick around the bigs for 222 games, earning himself a little money in the process, but he hasn't thrown a Major League pitch since September 2007, and so his acquisition by the Mariners a few days ago was met with legendary indifference. Soon-to-be 33 year old minor league relievers generally don't attract a lot of attention.

When I heard about the trade, though, I raised my eyebrows. Koplove? Really? After making sure we didn't give up anything of value (we didn't), I scrambled to check out where the new guy had been before we got him, and how he'd been doing. Turns out he's been in AAA for a long time and doing all right. The more I read, the more interested I became. Decent numbers. Kills righties. Sharp slider. Sidearm delivery - I'd forgotten about that. As I picked up more and more information, I became more and more convinced that he could conceivably be of some use at the Major League level. That the Mariners had very quietly brought in an arm who could spend 2010 as a valuable righty specialist in the bullpen of a competitive team.

Honestly, I'm probably biased, here. It's difficult to be objective about players of whom you have vivid memories from many moons ago. More often than not, you want to see those players succeed. If this were somebody else with the exact same profile but without that meltdown in relief against the Dodgers, I'd probably think nothing of it, the way I thought about the trade for Jared Wells. It would just be the acquisition of a guy who's a nobody today and who'll be a nobody tomorrow.

On the other hand, with a name like Mike Koplove, he has to be good.