Share All sharing options for: A Visual Guide to Where Felix Misses Bats, 2008-9

It has been far too long with no HeatMaps on this site, so how about some dazzling front page MS Paint-style graphics? Since the King takes the bump tonight, I figured I would run some queries on where Felix Hernandez generates his swinging strikes. I did not expect anything revolutionary out of this, it is intended more as a visual aid.

Data comes from pitch F/X and their pitch classification, which I trust for sliders, curve balls and four-seam fastballs. As for Felix's two-seam fastball and his changeup... well, I cannot even manually tell the two apart, so whatever, I just grouped them together as one pitch. 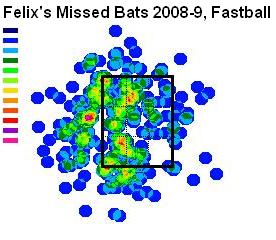 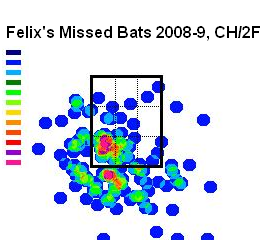 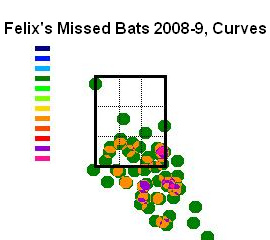 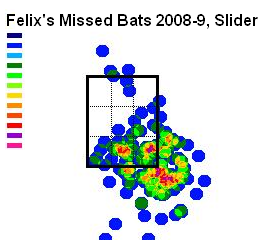 Any surprises there? I don't think so. The curves and sliders are nearly identical placements, down and away to righties with the big groupings being out of the strike zone. The change-up/two-seamer group is a little interesting for besides resembling a mirrored image to the curves and sliders group, it is slightly more elevated, with the biggest cluster actually inside the strike zone.

We would expect to see swinging strikes on fastballs concentrated near the upper portions of the zone, and that's true relative to the other three pitches, but by itself, there is not much of a dominant cluster as a goto location for Felix to get a swing and a miss with his fastball. It rather seems much more dominated by a left-side/right-side disparity.