Share All sharing options for: More On Strikes & Expected Strikes

Yesterday I presented a simple method of figuring out which pitchers have been working with the most generous zones, and which have not. With a range from 3% more strikes than expected to 3.6% fewer, this definitely has the look of being somewhat significant, with the upper quartile getting more strikes than the lower quartile by 30 per 1000 pitches.

The next step in anything like this is to examine the year-to-year correlation, to see whether you're looking at a repeatable trait or a bunch of random noise. Towards that end, I grouped together the 199 guys who threw at least 750 pitches in both 2008 and 2009, calculated their expected strike rate in each year, calculated the difference between that and their actual strike rate in each year, and then looked at the relationship. The result? 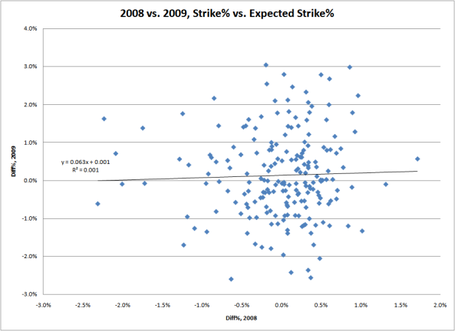 That's an r value of 0.034 and a significance F of 0.632. In other words, based on this data, there is no significant relationship between Diff% in Year X and Diff% in Year X+1. Suggesting that getting good and bad calls is less a systematic thing and more just umps choosing certain days to be funny.

This is by no means conclusive, and it's entirely possible that certain individual pitchers may be able to game the system a little bit. Since 2005, for example, Jamie Moyer has an average Diff% of +0.6%, which works out to an extra 18 or 20 strikes a season. But what does that really mean? Does it mean Moyer's doing something special, or is it statistical happenstance? Between 2005-2008, Greg Maddux comes out a slight negative. Jake Peavy's near the top of the leaderboard in 2009, but finished in the negatives in each of the four years previous. My inclination is to believe that, if there is skill involved in getting calls, it makes such a small difference that it's lost in the noise.

Umpires: annoying? Yes. Manipulable? Not as far as I can tell.