If you've ever wondered why I spend so much time talking about swinging strikes (or contact rate, which are basically the same idea), this is why: 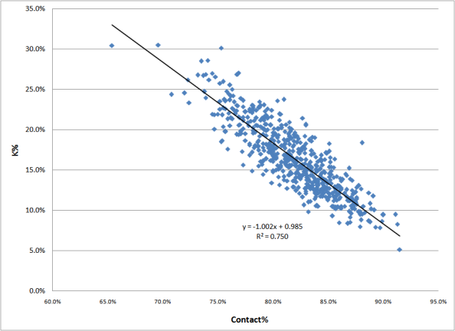 2005-2008 data, based on 567 pitchers who threw at least 100 innings in a season. As expected, there is a very strong correlation between missing bats and racking up strikeouts. I've looked at this sort of thing before, and it comes as no surprise.

However, the correlation isn't 1 (or -1, as it were), and what's always interested me is how certain pitchers can exceed their expected strikeout rate, while other pitchers undershoot. For example, last year AJ Burnett struck out 24.2% of the batters he faced even though, based on his contact rate, we would've expected him to come in at 22.1%. This isn't just an anomaly. It does appear to be at least somewhat within the pitcher's control. 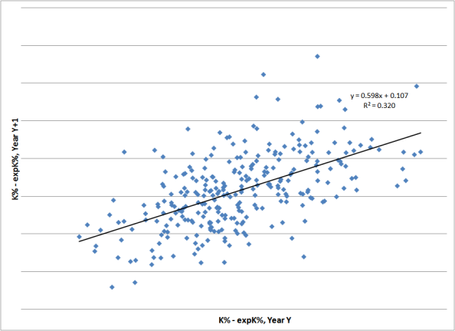 This is a chart showing 283 matched pairs of consecutive pitcher seasons with 100+ innings pitched (2005-2008). On the x axis is the difference between K% and expected K% in one year, while on the y axis is the same difference in the year following. What you see is that, though the correlation isn't as strong as in the first chart, it's still very much significant. It's clear that, though swinging strikes are important, they aren't the only factor when it comes to generating strikeouts.

Based on some preliminary investigation, the following factors are correlated to the difference between K% and expK%:

There's a lot more work to be done on this matter, though. Just maybe not by me.

In case you're curious, here are the pitchers who, between 2005-2008, showed the biggest differences between K% and expK%.