Share All sharing options for: A Little More On The Flipper Or The Dolphin Or The Whatever It Is

In the thread below, calim asked if the success of Washburn's slow curve has anything to do with the novelty of it. That is, if batters haven't been swinging because they haven't expected it. If this were true, we'd expect to see hitters taking fewer slow curves over time as they begin to recognize it as part of Washburn's arsenal. I decided to take a look at the numbers to date. What follows is a chart of the moving average of Washburn's Take% and Called Strike% on the Flipper pitch. 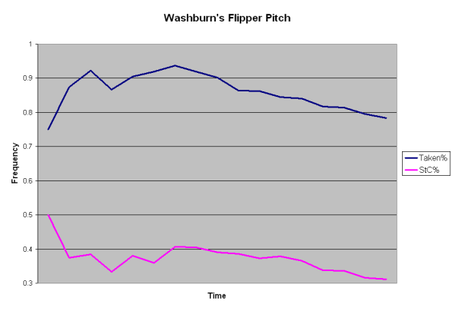 (Note that this excludes Washburn's start against Cleveland on 7/18, because PITCHfx wasn't working that day.)

Well there you go. Both rates appear to be in the midst of a steady decline, as batters have been swinging at more Flippers and taking fewer for strikes. Broken up:

92% Taken% over Washburn's first eight starts. 37 Flippers, 3 swings. There was a three-game stretch between 5/2 - 5/13 during which batters took all 17 slow curves that Jarrod threw. That sort of success is unsustainable and almost certainly has to be chalked up to novelty, as we have since seen the opposition start to adjust. 71% seems a lot more reasonable.

So that's the bad news. Hitters are starting to look for this pitch, and it's interesting to note the corresponding drop in strikeout rate - 17.4% over Washburn's first nine starts, and 13.8% since. But this is about the individual pitch, not Washburn's overall results, and with that in mind, the good news is that it's still generating above-average results. Batters aren't taking it all the time, but they're still taking it more than the average, and taking an above-average number of called strikes. So just because they've adjusted doesn't mean it hasn't still worked. It's also worth noting that swings aren't necessarily bad, as nine of the 23 swings that batters have taken against this pitch missed the ball entirely. It's been both a confounding pitch, and a difficult one to hit.

So there you go. The novelty of Washburn's slow curve has definitely worn off a little bit, but despite that, it's remained a pretty effective change of pace, which is reflected by both its performance numbers and the increased frequency with which Jarrod has elected to throw it (4.3% over his first five starts, 9.6% over his last five). We'll still have to monitor how well it does over the rest of the season. There's obviously some risk of batters catching on and launching some of the hittable ones over the fence. But for the time being, I'm pretty comfortable calling this a quality pitch. Of all the theories flying around that attempt to make sense of Washburn's success, this is one explanation that I can believe.