Neither Here Nor There

Share All sharing options for: Neither Here Nor There

Results of Washburn's 'Flipper' pitch on the year, assuming I have isolated it properly in the PITCHfx numbers (of which I am confident):

Washburn hasn't thrown a whole lot of them for strikes, but that's to be expected for three reasons: 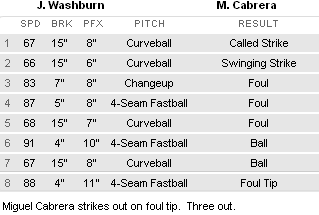 (1) It's not a pitch with which he has much experience

(3) Batters haven't swung at it

Jarrod Washburn isn't very good. He's just not, and too many people continue to let themselves get tricked by ERA. However, just because he's nothing special doesn't mean he hasn't improved, and one of the reasons he's been able to get better has been his embracing of the slow curve. Make no mistake. It's no Mr. Snappy, and its name is kind of stupid, but Jarrod's Flipper does appear to be a weapon.