I left work at 5-1. Magglio Ordonez had just hit a grand slam, giving Garrett Olson the illustrious line of five batters faced and five runs allowed. Driving home, I received the cryptic message "Can you send me updates on guti as you hear?" by text, followed soon thereafter by "slammed into wall trying to catch a ball when its already 7-1. Looked bad and was down for quite a while." The first one was bad enough, but upon reading the second, I took my foot off the gas and let everything wash over me. The Mariners were getting blown out, and Franklin Gutierrez - arguably the best position player on the team - was probably done for several weeks, if not the year, with some broken bones or a bad concussion or something.

In my head, I tried to be reasonable. Even a 5 WAR player is only worth a couple wins over the rest of the season. I tried to tell myself that the M's would survive, that they'd be okay and remain in the race long enough to get some help. But it didn't work. No matter what I did or what I forced myself to think, I couldn't shake the feeling that the team was finished. Being this far behind the Angels and losing our star center fielder - I was convinced that this was the day that killed our dreams of contention.

When you've spent the last few days feeling good about your team's chances, realizing that it's time to give up is a rough way to approach your front door. Dejected, I walked in, fired up MLB.tv, and waited for Dave Sims to confirm my worst fears about Franklin. The x-ray death knell was all the stood between myself and the bittersweet freedom of surrender.

It never came. Forgive me if I don't feel quite as down about this game as many of you. It was ugly. Olson got rocked. We lost critical ground in the division. But finding out that Gutierrez only had a couple cuts and bruises - between that good news and the Mariners then putting together a rally to make this a game, in the weirdest way today almost felt like a win. I know that, in the end, we lost a lot and didn't gain a thing, but when you think you've lost a lot more than you have, you still get to adjust your expectations upward, and I think that's what makes all the difference. Try to imagine it like this: 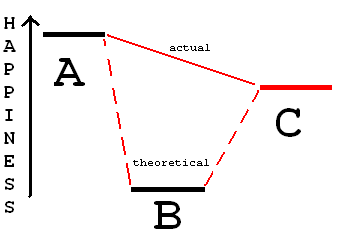 Overall, the Mariners went from position A to position C, which you would expect to reduce my overall happiness. However, due to concerns over Gutierrez's well-being, in my head the M's passed through transition state B before advancing onward, and hitting that sort of rock bottom in the middle makes even a rough loss feel okay. The second step up is fresher in my mind than the initial step down. Where I thought this team was done for, now I get to resume clinging to slim but real hopes, and that's quite the improvement.

The Mariners lost today. Garrett Olson lasted four outs, Franklin Gutierrez got himself hurt, and we fell further behind both the Angels and Rangers. Yet all I can think is that it could've been a hell of a lot worse.