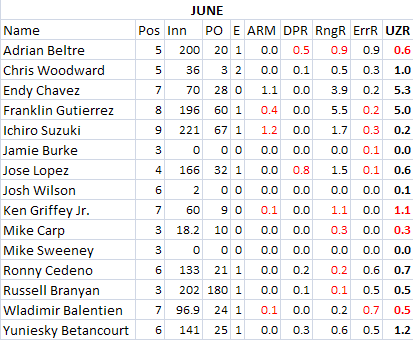 Our third month, and our third month with a new division leader. If you are holding out hope that Oakland is leading come August 1st, I have a bridge to sell you.

The Mariners defense was outstanding in April, when they racked up a +7.3 UZR. They slowed down to a +3.4 figure in May, leaving them at +10.7 total, a very good number. Their UZR for the month of June was 12.1! They key difference was a decided lack of black holes dragging down the team total. Jose Lopez and Yuniesky Betancourt actually both turned in positive months! A feat so outrageous I had to put it in font as dark as Yuni.

Once again, Franklin Gutierrez continued to be a man beast with a massive 5.5 Range rating. For a center fielder to get a Range that high is just mind boggling. That man covers more prime real estate than a Kirkland strip mall. Endy Chavez also busted out in a big way, with a team-leading 5.3 UZR right up to the point where his knee went kablooey. Endy compiled that 5.3 figure in 70 innings. 70 innings! That is about eight games worth. During June, Endy's glove alone was 1.5 runs above average per game. He will be missed. At least, until we finally get to see Ryan Langerhans play dammit.

Speaking of injuries, it is a wonder to think how good the team would have looked had Adrian Beltre had a more typical Beltre month instead of a rather big outlier. Not that it was that surprising, any man would be hard pressed to maintain a +4.5 UZR/month pace at third pace, even a man such as Beltre. Not to mention doing so with stabbing pain in his shoulder.

Griffey rebounds to a useful June. He still cannot hit for average, as his horrible line drive rate and BABIP (not unlucky) indicate, but he still finds ways to put the ball over the fence and poke some doubles that used to be home runs. His patience at the plate remained one of the best on the team and his resulting 1:1 strikeout to walk ratio helped propel him to an above average wOBA for the month.

I wrote last time that Adrian Beltre had a lower home run per fly ball rate than Mike Sweeney during May. Well, it happened again in June. Luckily, Beltre did smack eight doubles and a plethora of singles and his resulting .319/.347/.468 line was well above league average. Mike Sweeney also did not embarrass himself.

Branyan in May: .317/.412/.614 and 31 strikeouts to 17 walks. Branyan in June: .265/.376/.590 with 28 strikeouts to 16 walks. The inflated BABIP disappeared in June (.286) and Branyan simply responded by growing a longer penis and smacking one out of every five balls he put in the air (whether fly, line or pop up variety) over the wall. He even hit a triple! I would love for you to stick around Branyan because you have become one of my favorite players ever.

I have a fear that Chris Woodward, who sucks, is going to have a decent enough month of July while the Mariners fiddle about, and become the new Mike Morse, championed by those that ignore the tenets of statistical analysis. I guess there are worse things that could happen, like him sucking and the team tanking. Can we just find a real third baseman please?

Endy's bat will not be missed. More (read: some) Ryan Langerhans please!

Remember how much Jeff Clement sucked at hitting in Seattle last year? Well, his .296 wOBA that year would be worth 27 more runs than Rob Johnson's current season line of .245. I do not care if Rob Johnson gets in his catcher's gear and fluffs up the entire pitching staff before each game to get them relaxed, Jeff Clement is more valuable in the measurable qualities of baseball.

Four home runs from Gutierrez gave him one of the higher home run per fly ball rates on the team. There is that power we have been hoping to see. Four other extra base hits and a solid .300 average gave Guti a .513 slugging on the month. Combined with his natural patience, his June wOBA of .380 was the third highest amongst regulars. Who else has to pinch themselves a couple times a day to remember that no, we do get to watch him and Ichiro in the outfield for the next four years, at least?

Jose Lopez, five home runs! :) His .592 slugging percentage was tops on the team in June. Even higher than Branyan's. One walk. :( His .325 OBP was sadly nowhere near the low on the team. Thank you Ronny Cedeno and your .204 OBP, which was actually higher than your slugging of .167.

In the end, it was not actually a great month. I have focused a bit on the positive, but Yuni, our two catchers and Ronny Cedeno were just terrible and wiped away the positives of everyone else. The team ended June with a .330 wOBA, around .335 after park-adjustments. That is a touch below average.