The post below has received a mixed response, and I want to apologize if I have been moving too fast for any of you. I also want to say that Dave Cameron, Nate Silver, Tom Tango and I do not get paid to make posts like these. We do it for free because we enjoy contributing to the interchange of ideas around us. So please, take our posts for what they are: just the opinion of one person out there in the blogosphere. I did not ask to attract a following, it just sort of happened.

Secondly, even if you are not yet on board with ARSA (described below), at the very least you must concede that Wins/(Wins+Losses) is a useful statistic that we should all consider.

Thirdly, please note that I submitted this to The Seattle Times and they denied publication. If you feel strongly they made a mistake, as I do, please let them know.

Felix Hernandez is a good pitcher, there is no doubt about it. And I do not want to start a controversy here by suggesting that he is not a quality contributor to our big league roster. But is Felix a great pitcher? Is he a king?

While I have a reputation on this blog for using advanced sabermetric statistics, I want to illustrate the fact that sometimes more basic statistical categories, when used with sophistication, can help debunk common myths. In this post, I will use a dataset available to all of us to demonstrate that Felix Hernandez, while an above average pitcher, does not belong in Cy Young discussion this year, and probably should not have made the AllStar team.

The statistics I use here are available to all (so anyone should feel free to check my work for accuracy). The crude data is individual pitcher data in the following categories: wins, losses, total starts and run support. All of these can be obtained from a website called Fangraphs.

We all know that wins, despite their ubiquitous use by commentators and sports writers to determine Cy Young winners and AllStars, do not tell the whole story. For example, a pitcher on a strong offensive team might accrue a large number of wins just because his team scores a lot of runs. As anyone who pays attention to this blog probably understands, we can isolate those pitchers who have better or worse "luck" in terms of offense, by examing a statistic called Average Run Support.

But Average Run Support is a limited statistic. There are a lot more "luck" factors that impact a pitcher's ability to win games. For example, a pitcher might have a superior defense behind him or might play for a team with a talented bullpen that does not blow saves. These factors contribute significantly to pitcher wins. While stats like FIP or tRA help to isolate pitching performance from luck, they are imperfect. I would like to propose another statistic that, while simple, builds off the work of others with "Average Run Support" and helps to fill in more of the picture.

The statistic is: "Average Run Support Against" or ARSA. ARSA measures the impact of a pitcher's defense and bullpen in an effort to control for other "luck" factors that help a pitcher win games. ARSA is measured by, for a starting pitcher X, summing the run support of the opposing pitcher during each of X's starts, then dividing by X's total number of starts.

The following charts the ARSA of all the starting pitchers for the American League AllStar team on the X axis. The Y axis charts a statistic that takes the total number of wins for each pitcher and divides that by the sum of the total wins and losses of that pitcher, which yields a decimal number between 0 and 1. 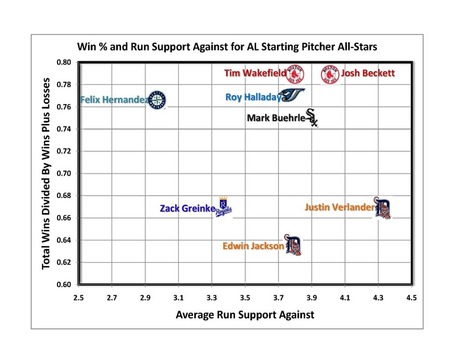 As you can see, Felix Hernandez ranks as the luckiest of all the American League AllStar starters with a 2.95 ARSA. This means he has benefitted from significant contributions from his bullpen and defense. The quartet of Tim Wakefield, Roy Halladay, Mark Buehrle and Josh Beckett have similar or better Wins/(Wins+Losses) than Felix, and yet have reached those heights despite significantly higher ARSAs (because ARSA correlates inversely with luck, a higher ARSA is good). While Justin Verlander and Edwin Jackson have lower Wins/(Wins+Losses) than their Allstar teammates, they got there despite significantly lower ARSAs (4.32 and 3.78 respectively). And Zack Greinke is having a tremendous season despite playing for the Royals, which has helped him to a 3.33 ARSA (almost a half a run higher than Felix).

I want to reiterate that I don't think that Felix is a bad pitcher. His scouting reports are very strong, and he would likely be doing well even if he did not have quite so much luck on his side. But there is no denying that he plays on a team with a solid defense and a good bullpen, and that has helped him significantly this year. We should celebrate Felix's success this year, but let's not delude ourselves. He is not quite in the same class as his fellow AL AllStars. Not yet anyway.