So Losing Tonight Would Be A Buzzkill

Share All sharing options for: So Losing Tonight Would Be A Buzzkill

You always want them to suck. You always want the bad players to be bad people. It's why so many of us (myself included) love to discuss the unpleasant things we hear about Carlos Silva while by and large ignoring his more agreeable qualities. People love to rip on professional athletes, but it goes against our nature to believe that good people can fail or that bad people can succeed, so when a player becomes a problem, our inclination is to picture him in a negative light that extends beyond the lines of the field. We would feel guilty about bashing a bad player who's a good person. Ergo, bad players need to be bad people.

We've seen it happen with Yuni. At first, he was disappointing. He wasn't living up to his potential. Then fans started calling him lazy. Unmotivated. Fat. Unprofessional. And once the Vanity Fair article came out a year ago, people used the information therein to justify calling him all kinds of names and renouncing him as an asshole. Yuni used to be a guy who simply wasn't playing near his ceiling, but as more time passed and his play on the field kept slipping, he became a target for all kinds of abuse. Some of it was warranted, but some of it was not.

The truth of the matter is that we don't know anything for certain. Not as far as Yuni the person is concerned. The only window into his personality that we get to look through is the one provided by journalists like Shannon Drayer, and their accounts seem to paint the picture of a kind-hearted young man who just doesn't get it. A guy who's in over his head, a guy who cares a lot about a lot of things but who doesn't understand how to make himself better, or even that he needs to be better in the first place. Were someone to ask me to describe Yuniesky Betancourt in just a couple words, I'd probably call him a well-meaning idiot.

I don't mean to suggest that he's actually stupid. For all I know, he could spend his free time normalizing Heisenberg integrals. In baseball terms, though, he isn't smart. And ultimately, that's good enough for me to be happy he's gone. I'm sad that he has to leave the only team he's ever known, but for one thing, the Royals might be more Mariner than the Mariners, and for another, baseball trumps everything else. For me, anyway. Though this whole thing would be easier if Yuni were a total dick on top of being a lousy player, I'm not broken up about a polite and seemingly genuine person getting shipped away, because this is a deal that helps the Mariners, and that's all we ever want. This isn't a blog devoted to individual players. This is a blog devoted to a baseball team, and while some might wish otherwise, good teams don't have room for bad players, no matter how cordial.

That we were able to get two young pitchers back for a shortstop who can't hit, walk, or field is a nice surprise. I wasn't sure if a market for Yuni even existed anymore, although I guess it makes sense that the one team who'd want him is the Royals. Remember how Jose Guillen got all upset about a few Mariners who he didn't think were playing hard enough? This could be fun to watch. Neither of the arms we got back count as can't-miss prospects, but landing someone like Cortes - a power righty who profiles as a potential late-inning reliever even if he doesn't improve his change - is a bigger return than I would've expected, and he instantly becomes one of the system's better talents on the mound. That says a lot about the system, but it also says a lot about Cortes. Big 22 year olds with good velocity and a plus breaking ball are the definition of projectable.

For Yuni, this is going to be a difficult adjustment, and I'm glad that he's going to have a few familiar faces to ease him into a new clubhouse. I don't know why the Royals made this trade. Yuni's gotten steadily worse from the moment he arrived in the big leagues, and he doesn't seem to possess the motivation or cognizance to make himself better. Right now, he sucks. He sucks at pretty much everything. But change-of-scenery trades have their own name for a reason, and it's not without the realm of possibility that he puts himself back together with another ballclub. Stranger things have happened, and while the Mariners have disciplined him in a lot of ways, getting traded for a couple minor leaguers might finally be the wake-up call that gets him out of bed. We've seen flashes of his old defense from time to time this year. We know the ability is in there somewhere. It's just now become the Royals' problem to try and get it out. I'm skeptical, but interested.

All in all, it's a bittersweet afternoon. Bitter, because a young infielder once deemed untouchable has seen his stock fall so far that all he's worth now is a couple live arms, but - more importantly - sweet, because this concludes one troublesome era and ushers in another, hopefully more positive one. Yuni isn't our problem. Not anymore. Not now, and not in the future. Yeah, this team is still without a Major League-caliber shortstop, but Yuni wasn't a realistic solution, so it feels good to ship him off and wipe our hands clean. Whether we go forward now with Ronny :(edeno or someone like Jack Wilson, we'll see, but it most definitely won't be with Yuni, and I think that's reason enough to be pleased. 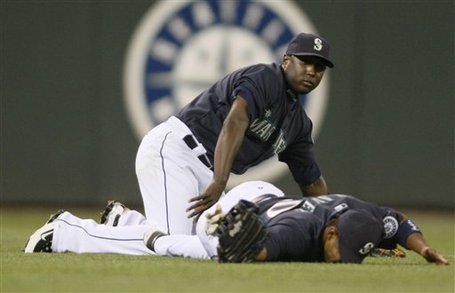