Share All sharing options for: Report Card: Position Players, May 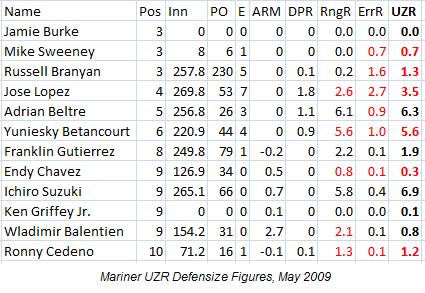 The Mariners defense compiled a 6.3 UZR in the month of April, worth a grade of A. In the past month of May, they accounted for a 3.4 UZR. Last month was topped by Franklin Gutierrez with a 4.2 UZR. In this month we had a fantastic pairing of Adrian Beltre with 6.3 runs and Ichiro Suzuki with 6.9 runs. Unfortunately, they were dragged down from the middle by Yuniesky Betancourt and Jose Lopez who combined to throw up a -9.1 UZR rating. Russell Branyan saw a dip over his nice April numbers, but that was entirely within the error category, so I am not concerned.

Moving right along. Another solid month for Wladimir Balentien who, with his defensive improvements and the hot hitting of Michael Saunders, helps to make Endy Chavez expendable should Jack Zduriencik choose so. The concern is that most of his rating came from his arm, which as runners adjust to, will drop. Range will trump in the long run.

Click for full size. 2009 Mariners wOBA for May 2009. Source StatCorner.com

Griffey is not hitting the ball with too much authority, so his subpar average and slugging are not very much surprising, but at least his version of cratering age-related decline comes with an incredible, for the Mariners, plate patience. Pitchers are still wary of throwing Junior middle-in, so they are attacking the outer edges and Griffey has responded by letting them work. His 37.8% swing rate on the month was by far the lowest on the entire team.

Adrian Beltre had a lower home run per fly ball rate in May than Mike Sweeney or Ichiro Suzuki. Please wake up Beltre, this team needs you to do better. Next year's team needs it too.

The Grand Branyan posted a .317/.412/.614 month. At one point, I was starting to get worried because his walk rate was dropping. Branyan responded by drawing five walks in the next four games and he ended May with 17. He also struck out 31 times.

Gutierrez hasn't yet flashed a big upgrade in his offensive skill set that many of us believe he can take, but once again his approach at the plate is refreshing to watch. 11 walks drawn and he offered at just under 40% of pitches thrown to him, second on the team only to Griffey.

Jose Lopez  + Wladimir Balentien + Yuniesky Betancourt + Rob Johnson = 26 runs below average. There are lineups where we batted them 5-8. Just in case you were wondering why we were bad.