Share All sharing options for: Felix and Fastball Percentage

We all want King Felix to throw more bendy/slow things in the early innings, especially against left-handed batters. During today's game I found myself wondering if he was throwing more or less fastballs than usual, so I poked around with data from today's game, last week's shutout, and Felix's worst and best starts of the season, per tRA. Here are the starts I looked at:

Felix was crushed by the Twins, giving up six runs on the back of homers by Mauer and Morneau. He also walked three, only struck out two, and departed after four innings in what would turn into a blowout loss. His tRA? 10.45. Whoopsies.

What happens when you give up no line drives, one walk, have 63% of balls in play stay on the ground, and strike out more than 20% of opposing batters? You get a tRA of less than 0.5. Unfortunately, in Felix's case, you also waste a lot of pitches on Angel foul balls, meaning he was pulled in the 7th after 110 pitches. The Mariners would go on to win the game after tying it up in the 9th on what is now the second most heroic home run of the year.

Felix took advantage of a lineup full of the MLB equivalent of short bus schoolchildren, holding the Padres to two hits over nine innings and never looking in danger of allowing a run. He didn't really pitch that well though, as evidenced by his frankly silly amount of walks and hbp, and he didn't get that many strikeouts either. tRA's verdict? A pretty good, but not fantastic 3.23.

This just happened so I'm sure that you have some idea what went on in the game. I'd guess Felix's tRA was a touch under 3.0, but Statcorner doesn't update until midnight so whatever. He pitched pretty well, despite Reynold's late home run.

So that's two pretty good starts, one absurdly good start, and one level-Silva abomination. But I'm not going to do the analysis this time, you are. Take a look at the graph showing %fastballs against pitch count below and see if you can match up the starts to the fastball percentages. Remember, your choices are May 9th, May 30th, June 16th, and June 21st, with corresponding tRAs of 10.45, 0.54, 3.23, and ~2.90. And just to take away an obvious identifier, I've normalised the pitch count*. When you're done answers may be found here. 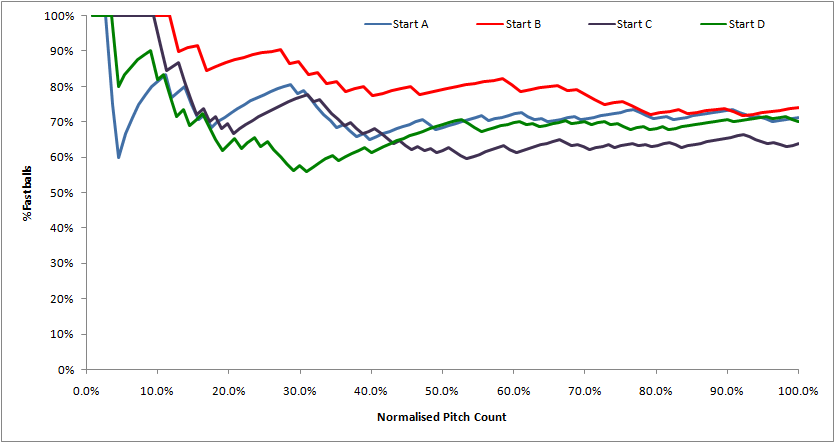 How did you do? Any interesting observations or insights?

*Yes, I know this skews the data. Why do you hate fun?