I didn't quite get around to everything I wanted to on my post yesterday, and these give me an excuse to fiddle around with learning pitch fx a little bit better (and the chance to improve my graphs!), so y'all are getting a little bit more on Brandon Morrow's Thursday start as well as a look at his durability in general. Without further ado, let's go past the gaudy swinging strike numbers he posted and take a look at the pitches the Padres actually managed to make contact on. The following graph shows 'contact strikes' - foul balls, outs, and hits. 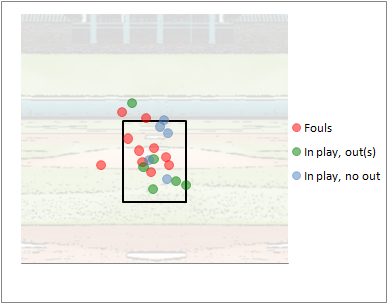 Unsurprisingly, there wasn't too much contact out of the zone. The Padres aren't great at putting bat on ball in the first place, Morrow's pitches were moving all over the place, and, well, the reason there's a strike zone in the first place is because it's hard to hit pitches that aren't in it. It looks like Morrow's pure stuff saved his bacon a few times on Thursday, as a tonne of pitches down the middle were fouled off. He didn't fare very well up in the zone, but when he dropped down (assumedly by accident) he generated a few easy outs. Let's look at lefty-righty splits again:

Left-handers, as they are wont to do, hit pretty well against inside pitches, with Adrian Gonzalez responsible for two of the hits. The green dot in the middle is Luis Rodriguez flyout to right-centre field which probably should have been much deeper. Morrow also didn't generate very many fouls against lefties, which indicates that he wasn't messing much with their timing despite throwing the occasional changeup. The few fouls he did get were all on the outside edge of the plate or away. Righties, on the other hand, only got two hits in Morrow's four innings of work, fouling off pitch after pitch thrown dead centre. In a pretty strong contrast with the left-handed chart, right-handers just couldn't get the timing down on Morrow's fastball, with only four balls even put in play. David Eckstein was the only one who didn't seem to have this problem - the blue dot dead centre was the double responsible for the Padre's first run, and his other hit was a single on an elevated fastball, again down the middle.

Based on this start, Morrow seems a lot more effective against right-handed hitters than lefties, but there's probably a large bias due to (left-handed) Adrian Gonzalez being the only real hitter in the Padre lineup. Still, if this is a real effect, we can add 'poor platoon performance' to 'command issues' as the reasons Morrow wasn't able to do his job effectively as our closer during the initial portion of the year. It's perhaps fortunate that Morrow was awful as a reliever this season, as it's allowed the club to go back to the Morrow-starting experiment. When I was looked at the pitch fx data for the Padres start, I found myself curious about how well his velocity was holding up compared to pitch count, and whether we could see any sort of 'strengthening' effect for his starts last year. Velocity data for both of Morrow's starts this year and all five of his 2008 starts are shown below:

Well... that's quite pretty, I guess, if more or less entirely unintelligible. You can see that in general that more pitches in a game means a lower velocity, but that's not exactly a massive surprise. The amount of data in the graph makes it very difficult to tease meaningful information out of it, so I'll let the computer do that for me by showing the trend lines for each of Morrow's starts, which should show us what we're looking for. Note that the y-scale on the graph has changed from 90-100 to 92-97 in order to give a better contrast between starts.

Well look at that. The first thing that jumps out is that Morrow actually gained velocity during his three innings in Colorado, which I'll (lazily, and because I can't figure out a good explanation) put down to small-sample weirdness. The Padres start was as expected, with fastball velocity going from about 95.5 mph to a touch below 95 by the fourth inning, accompanied by a little more horizontal break. Perhaps more interesting is the 2008 data. In his first start against the Yankees, Morrow started out at almost 97 mph, and even a century of pitches didn't manage to drag him down much past the 95.5 mph he started off both games with this year. His next start saw his velocity drop by more than 1.5 mph and also fall much faster over the course of his outing. Surprisingly, he bounced back for #3, but his velocity slipped again for starts 4 and 5. He tired out extremely easy last year, and it doesn't look like five days rest was enough for the 100+ pitches he was routinely tossing per start in September. This probably had a large effect on the decision to leave him in the bullpen this spring.

It looks like his outstanding performance against New York hurt Morrow's development more than it helped. By pitching so well and maintaining his stuff for so long against the Yankees, he left himself open to throwing more pitches than he was really ready for over his next four starts, and the velocity data shows that this backfired pretty severely. Morrow's on strict pitch counts this year for a reason, and I think the Mariners will take every opportunity to give him extra rest when they can. Making sure that Adair and Wakamatsu (and by extension the front office) can keep an eye on him as he's getting stretched out this year may be one of the factors keeping him in Seattle. Hopefully they know what they're doing, and his arm isn't agonisingly painful between starts like it was in 2008.