16 is a crazy number

Share All sharing options for: 16 is a crazy number

15 and 16 form a Ruth-Aaron pair under the second definition in which repeated prime factors are counted as often as they occur.

Which I suppose is all well and good, but why is 16 such a crazy number in our case? As it turns out, that's the number of swinging strikes Brandon Morrow generated in his start last night against the Padres. In 4 innings and less than 80 pitches (and walking the pitcher). For those of you keeping track at home, that means he'd have equaled Carlos Silva's season total sometime in the fifth had he continued. I know he was getting hit pretty hard, but today was Morrow's equivalent of Felix's start against Texas. To get that many swinging strikes you need to have something special going. So what was he throwing?

Mostly fastballs, to be honest. This is my first attempt at a pitch fx analysis, so hopefully I haven't bollocksed anything up here... 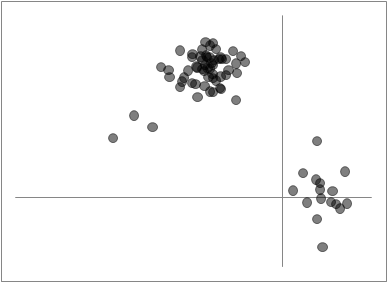 You can see two clear groups here. The one hanging around up top and a little left of centre is his fastball, and the other is the slider. Note that Morrow wasn't really very good at controlling the vertical break on his slider today - sometimes it was a Sean Green frisbee special and other times it went all slurvey on him (Jeff says that the 'slider' with a tonne of drop is actually Morrow's curve, and I'd be inclined to trust him). There's also a little 'grouping' of three pitches down and to the left of the fastballs, which gameday has classified as changeups, a definition which I have no dispute with. So we have a handful of changeups and a decent amount of sliders against a very fastbally backdrop. And where was he throwing these pitches? 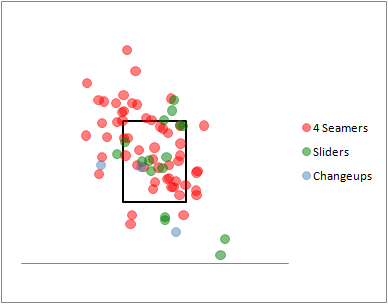 Fastballs tend towards the catcher's left and are generally high in the zone or up. From this graph we can both see the run on Morrow's heat (the break is towards the right-handed batter's box, and is pretty pronounced even at higher velocities) and the reason he's a flyballer. It also looks like he loses fastball command in the natural direction of its movement, which... I dunno, it tells you something, I suppose. Were there any noticeable differences between Morrow's approach to left-handers vs. right-handers?

Morrow threw no changeups to righties and only a few to lefthanders, which makes sense because it's not a great pitch as it is and changeups are generally more effective to opposite handed batters. He also seemed to have some issues with commanding the slider against lefties, throwing the ball at their feet a few times - although that's likely attributable to small sample size. We also see Morrow trying to work outside when he's around the zone, but his command wasn't great (it's Morrow, after all) and he left a fair share of pitches straight down the middle. Let's take a look at the actual results now, breaking each pitch into one of four outcomes: Balls, contact strikes (fouls, balls in play), called strikes, and swinging strikes. 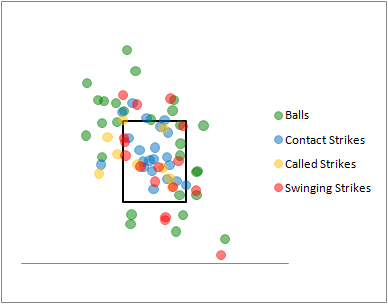 Umpire wasn't calling balls and strikes very well on the vertical edges of the zone: Morrow got a few extremely generous strike calls over Burke's left shoulder, which were probably made up for by numerous strikes on the black called balls over Burke's right. There are an absolute tonne of swinging strikes showing up in this graph. It's worth pointing out that Morrow was facing an extremely poor lineup here. The Padres have a couple of guys who can't make contact to save their lives (Kouzmanoff and Headley) to go along with a pitcher, and there's where most of the swinging strikes are derived - 4 for Kouzmanoff, 3 for Headley, and 4 for Geer. Still, you can only beat what's put in front of you, and Felix Hernandez got 5 less swinging strike in 5 more innings against the very same team two days prior. Let's see if there's a pattern in terms of batter-handedness with the swinging strike data.

Again, compare these charts to the pitch types shown above. You'll probably see that against righthanders, Morrow got 9(!) swinging strikes on his fastball compared to one from his slider, and against lefties he recorded four swinging strikes on offspeed pitches (mostly sliders) against one with his fastball. So, without wanting to draw conclusions from such a small sample, it appears that righthanders really have trouble making decent contact against Morrow's fastball while lefthanders hit it fine but have major problems with the slider. This is somewhat counter-intuitive to me, as I had suspected the opposite when I first saw the relative movements of those pitches. Sliders move towards the left-handed batter's box, fastballs to the right, and I assumed that pitches moving towards the hands makes it a little easier to make contact, which is without doubt a completely false assumption in Morrow's case (for this game, at least). You'll also probably notice that for whatever reason right-handed batters were swinging at absolutely everything in the zone. It's really unusual to only see three called strikes when hitters are swinging and missing so often.

Of course, any time you get 16 swinging strikes in 4 innings of work is going to produce some unusual results. I'm still on the 'send Morrow to Tacoma' bandwagon - mostly so he generates some semblence of command, but this was about as good as we could have hoped for from him today, despite the two runs allowed in the first and walking the pitcher again. Of course, Tacoma's opposition probably have better hitters than the Padres...