The World Is A Strange And Wonderful Place

Share All sharing options for: The World Is A Strange And Wonderful Place

Sighted last night at a San Diego-area sports bar during Game 7 of the Stanley Cup: 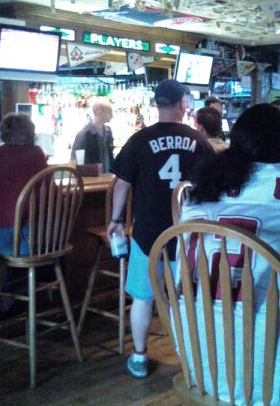 For those of you keeping score at home, that's a Kansas City Royals hat, a Kansas City Royals thermos, and a Kansas City Royals Angel Berroa #4 replica jersey. That guy walked in during the first period intermission, and for all my eyes cared, it might as well have been Krysten Ritter on a unicorn. I stared in quiet disbelief as he walked by our table and approached the front bar, and as soon as he turned his back I had no choice but to take his picture. How couldn't I? Were someone to ask you to visualize something really weird, you'd probably imagine a sort of wild acid trip with lavender mountains and conversational bark, but oftentimes the weirdest things are jarring in their simplicity. This was one of the weirdest things I'd ever seen.

When faced with something like this, you're left to consider two options. My first thought was that the guy was being ironic. That this was all part of some joke he was playing to get a few laughs. There were some problems with this, though. For one thing, he didn't strike me as the sort to pull something like that. He was middle-aged and ordinary, and he didn't really interact with many people, so he didn't seem like a man who does things to get a reaction. However, the bigger issue is that people only respond to irony when they understand the joke, and given that the Royals are almost as invisible around here as the Padres, it didn't work. It was too obscure. Too perfect. Angel Berroa? The Kansas City Royals? It was a setup that only people like me could appreciate, and I'm not like a lot of people. This couldn't have been a joke, because it wasn't being delivered to the right kind of audience.

So I was left with the other, far more troubling option. The man was serious. It's not that there's anything wrong with being a Royals fan, and it's not that there's anything wrong with decking yourself out with team apparel and accessories. Both of those are perfectly acceptable. I'm an Ottawa Senators and Seattle Mariners fan in San Diego who's been known to wear those logos around the city, and neither of those teams are any less out of place. A person is free to root for whatever team he wants, and a big part of that is wearing the colors into hostile or indifferent territory.

It's just...Angel Berroa? In case you're not familiar with the Angel Berroa backstory, he was a hotshot young shortstop who came up and won the Rookie of the Year in 2003 as he helped lead the Royals to their first winning season in nearly a decade. Rather than build off his success, though, Berroa's career went into a tailspin, and his productivity dropped off to the point at which he was out of a regular job before he turned 30. He hacked at everything, he made a lot of errors, and for years embittered and resentful Royals fans saw him as an emblem of everything that was wrong with a go-nowhere franchise. Unlike most Royals at the time, Berroa wasn't just bad - he was bad after being good, and that's what bothered people the most and made him stand out. Berroa was supposed to be one of the guys to lead the Royals back into relevance. Instead of making his teammates rise to his level, though, he soon sank to theirs.

Nothing about it made sense. Either this man was delusional, a man who's come apart at the seams while yearning for the halcyon days of Mark Quinn and Joe Randa, or something else was at play here. And that last bit makes me wonder - maybe Royals fans feel they have a little freedom in the jersey department. Maybe when you're a fan of a team who hasn't done anything since New Coke, you abandon all precepts of hope and earn the leeway to wear whatever the hell name you want, unshackled from the social obligation to wear the name of someone good. Carlos Febles made a nifty play once. Luis Matos was a stud. Jermaine Allensworth never got the chance he deserved. Maybe you come to the conclusion that, since people will already make fun of the team, the player makes little additional difference. That you can pick any player because you saw him go deep or because it's on sale and it just doesn't matter. I'm not sure. Is there a level of bad beyond which it would be acceptable for me to wear a Rene Rivera? On the one hand, I hope I never find out, but on the other, I'm curious.

I stopped paying attention to the guy after a little while. He wasn't really doing much, and once the hockey game resumed that kind of captured my attention. Looking back, perhaps should've asked him what the deal was, but to be honest, I like the mystery. After all, the best things in life aren't answers. They're questions.

A few years from now, if I'm sitting in a bar and a guy walks by with a Betancourt #7, I wonder what I'll think.