The moon molester that Branyan hit last night (which you can see here) came in at 459 feet, making it the 11th longest home run hit in the Major Leagues so far this season. And he didn't even pull the ball. People talk about Griffey hitting the Baltimore warehouse all the time, but if Branyan actually got out ahead of a pitch, he might be able to clear it.

Branyan's longball also added to this: 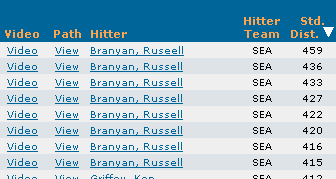 There's so little diversity at the top that HitTracker decided to give credit for last night's homer to Russell's Indian uncle. Russell Branyan is the only Mariner so far this season to hit a home run at least 415 feet, and he's done it eight times. The next longest is Griffey, at 412. What follows is a list of teams arranged in descending order of the number of players they've had hit a homer at least 415 feet:

This offense is weak. And Russell Branyan is its saving grace. His batting average is eventually going to regress into more reasonable territory, but that won't stop him from being one of the best acquisitions this team has ever made. While I always liked him, I never thought I'd love him as much as I do right now. Russell, when you're choosing which hat to wear on your Cooperstown plaque, remember this: a lot of teams have signed you, but only one team ever gave you a chance.