Share All sharing options for: More on Jarrod Washburn

Note: The majority of this article was also published at FanGraphs.com.

Jarrod Washburn certainly has seen added success by adding his two-seamer pitch and deploying it against left-handers. I brought up the first half of this graph in the original LL article, and then posted the full thing in my first FanGraphs write up, but I will republish it here for ease.

You can clearly see the gains in swinging strikes in the 87.5-90mph and the 92.5-95 range. The former is clearly the two-seamer. As for the latter, I am left to speculate that adding the two-seamer also made his four-seamer a bit more deceptive since it is going to come from the same motion, but exhibit slightly different movement and about a five mph difference in speed. In other words, Jarrod's two-seamer is like Felix's changeup as Jarrod's four-seamer is like Felix's two-seamer.

But is it just that? I wanted to see if there was also anything to be found in the location data and that investigation brought forth these charts, 2008 pitches to LHB on the left, 2009 on the right. 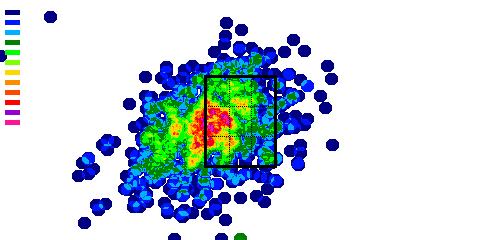 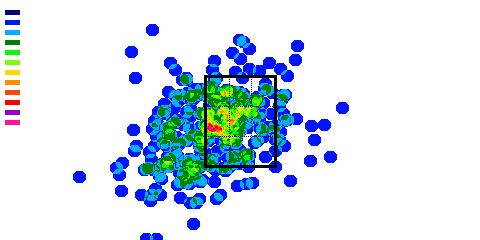 Well, aside from the fewer pitches in the 2009 dataset, these two pictures look damn near identical. There might be some trace differences, but I seriously doubt any of those could be playing much impact in the huge jump in effectiveness that Washburn has seen to date.

Location shot down, I took one more stab at pinpointing the cause. On the theory that with a new two-seamer in the mix, hitters were seeing a wider distribution of speeds and that was putting them on guard more, I expanded my first graph to include all pitches to left-handers this season compared to 2008 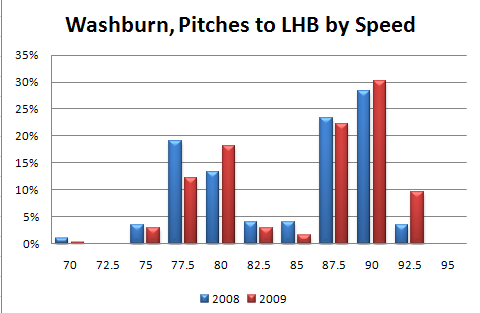 Nope, not really. It is a fairly close match in terms of speed distributions. What's left? Movement. I do not know a good way to visualize movement data, so apologies for the lack of readability here, but I will do my best. I broke pitches into four categories, whether they were swung and missed at or not and their starting speeds since the above histograms demonstrate that Washburn has a break between pitch types around the 85 mph mark. The first number is the average largest deviation, in inches, of the pitch from the straight trajectory*. The second number is the average angle of that break. To visualize that, draw a compass rose, 0 is south, +90 is west and -90 is east. The final number is the sample size.

Washburn's slurvey crap certainly is not moving dramatically differently than in years past. Among his swinging strikes, the two rows are insignificantly different. There is a bit more break and run shown overall as the second pairing shows, but nothing huge. Now granted we have a small sample, but we do have what looks like a potentially meaningful change in the third and fourth pairings. The group of fastballs and fastball-type pitches all seem to be moving more in on the left-handed hitters this season and particularly among pitches that are missed.

Still, I am not anxious to jump to any conclusions on that. We are talking about a four compass degree of difference in that third pairing, which does hint toward the increased use of a two-seamer, but interestingly enough, the length of the breaks are still similar when two-seamers are known for generating more movement.

Final conclusion? Washburn is dominating lefties, and he's throwing a two-seamer this year. His spread of speeds hasn't moved much, his locations haven't moved much and the magnitude of the movement on his pitches hasn't changed at all. What has changed is the angle of the break on pitches over 85mph by four degrees. Over a sample of 11 and 23 pitches. That's one flimsy nail to try hanging a hat on. Wait and see I suppose, though I would love to be following another team to find out.