What's up with Adrian Beltre?

Share All sharing options for: What's up with Adrian Beltre?

A sixth of the way through the season and Beltre has an OPS under .550, making us pine even for the 2005-version. Worse, he looks futile at the plate. The line drives are down while the ground balls and infield flies are way up. His walks are down. What's going on?

I have a theory. It's damn near unprovable save for sitting down with Beltre and asking him, a luxury I do not have, so instead I will just lay it out here. The motivator for this theory stems from three numbers, shown below courtesy of Beltre's StatCorner page: 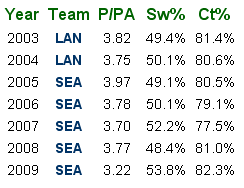 First, look at the tremendous drop off in pitches seen per plate appearance (P/PA). This sort of deviation from a well-established pattern screams anomaly. The reason behind the first number is backed up with the next two. Beltre is offering at pitches (Sw%) more often than ever recorded before, and offering at pitches out of the strike zone more often than ever as well. He's also making contact (Ct%) more often than ever before. Now, that last one is, in isolation, a good thing, but it is also the reason why, when combined with his Sw%, his P/PA is so low. You can see Beltre's second highest Sw%, in 2007, was matched up with his lowest contact rate; he was swinging often but missing as well, which prolonged at bats and is the reason his P/PA didn't drop too far.

Those are the facts of the situation. They are indisputable. Now comes the theory. I think Beltre is pressing. Possibly he feels the pressure of a contract season, but honestly I do not think that's it. I think he is feeling the pressure of not doing well at the plate. He stated a couple times over the off season his desire to be back on a winning team. Well, it turns out this team is winning, and it seems to me that perhaps Beltre is desperate to contribute as well. Or maybe it is some completely other reason.

The reason I think Beltre is pressing and thus producing the figures above is due to the type of plate approach he has. It does not merit a long explanation since most of us have been watching it for going on five seasons now, but suffice to say that Beltre is not the most patient of hitter under the best of circumstances. Out of his rhythm and trying to produce again, I think he is just exacerbating his already existing bad tendencies. To put it the most simplistic terms, I believe that Beltre is trying to hack his way out of a slump.

As a proxy method of testing my theory, I surmised that Beltre likely did not start off the season pressing, or that at least, he would have pressed more as the season wore on. I decided to look at two numbers that I thought would indicate that. First, the standby P/PA. The second number was how often Beltre swung at the first pitch of the at bat. I originally split the season into halves, and it showed the same pattern as below, but I decided to split the season into thirds to better show the trend and it jumps out at me so much I am putting the whole thing in bold and large type.

Beltre, dude. You need to relax and get back to being waiting for your pitch. You cannot force the pitcher to throw you something that will let you hit your way out of your rut. Instead, they're going to key in on your eagerness and throw you junk, getting you into 0-1 counts more often and further worsening your slump.

This article was completed before play yesterday. Beltre saw seven plate appearances last afternoon. He offered at the first pitch twice and saw a total of 35 pitches over the seven PAs. He went 2-7. Maybe he read my draft.