Today is the 20th of May. The Mariners are 40 games into the season, and of those 40 games, Adrian Beltre has appeared in 39 of them. Over those 39 games, Beltre has come to the plate 165 times, and over those 165 plate appearances, he has put up a .205/.236/.308 batting line with two home runs, 11 infield flies, and one of the lowest line drive rates in baseball. Given these wildly uncharacteristic struggles, I thought it'd be worth looking at the heat maps to see if we can find anything that might at least in part explain why what's happening is happening. You should recognize these charts as being similar to the ones in the Betancourt post a little while ago.

(Thanks to Matthew for generating these colorful bits of heaven.)

These first charts show the location of all pitches thrown to Beltre, both overall and split by handedness:

Click through to see the full size image. Once again we're dealing with a pretty small sample size of at bats against lefties, so the bottom right image is a little sparse.

What do we notice?

vs. RHP: in 2008, pitchers spent a lot of time over or beyond the outer half between the shin and the thigh. There's a lot of red/pink around the same area of the zone, along with some hints of expanding the zone outside. Not a lot of pitches thrown inside. In 2009, there's pink everywhere - low, high, inside, outside. The only area pitchers have avoided is down and in. They've worked Beltre really hard over the outer third, but they've also targeted both outside off the plate and high and tight.

vs. LHP: in 2008, we see a lot of pitches where Beltre can hit them, along with a decent amount off the plate outside. Based on our small sample, 2009 looks like it's been pretty similar to date.

Now let's look at the same charts, but this time only using pitches at which Beltre has swung: 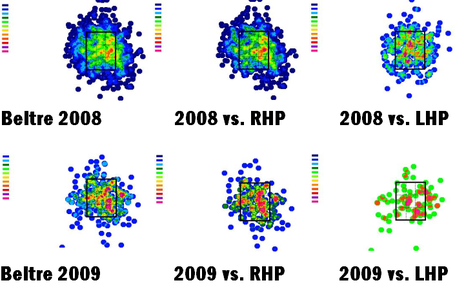 What do we notice here?

vs. RHP: in 2008, Beltre swung at the pitches he was given in the strike zone and laid off of a lot of what he was fed just outside. In 2009, it's a similar deal, although he's kept himself from chasing that much high and tight. He's also jammed himself on several occasions and on several others gone fishing after thigh-high pitches off the plate. The big thing to notice, though, is all that pink over the outer half. He did the same thing in 2008, but in 2009 it's more uniformly spread out.

What do we take away from this? There have been some changes in pitching and swing patterns this year. Pitchers have changed heights against Beltre more than they did in 2008, and Beltre, in turn, has swung at a lot of those pitches, both low and away and high and away. He's also swung at more pitches middle-in. These are factors which could in part serve to explain why Beltre's been struggling.

But they don't explain everything, because the magnitude of his offensive dropoff is greater than the magnitude of change between the 2008 and 2009 pitching patterns he's seen. The majority of his swings against righties are again on pitches over the outer half. His swings against lefties don't look too different. Yet against righties he's hitting .200 with reduced power, and against lefties he's still searching for his first home run. Based on the heat maps, things shouldn't be as bad as they are. Given this information, he shouldn't be pulling the ball or going up the middle any less now than he did in 2008, and given that, he shouldn't be experiencing this sort of power outage.

Armed with the heat maps and the knowledge that Beltre's making contact about as often on both strikes and balls as he ever has, we have to consider that the problem has less to do with the pitching and more to do with Beltre's swings. On contact this year he's hit .254 with a slugging percentage of .381, as opposed to .326 and .551 for his career. That's terrible, and not at all what we've come to expect from a guy who in the past has shown significant power to all fields. Has the pitching been part of the problem? It probably has been, yes. But until Beltre starts putting actual good swings on the pitches he's been swinging at and hitting all along, then he's going to shoulder the bulk of the responsibility. Something in there has gotten worse, and it badly needs to change.