Portrait Of A Lost Cause

Share All sharing options for: Portrait Of A Lost Cause

Let's say I give you the following information concerning pitches to a particular batter:

Over time, this batter has seen fewer fastballs and fewer pitches in the strike zone. What would cause something like this? Presumably, the batter is either (A) a fearsome power hitter, (B) a hacker, or (C) both. Pitchers will work around guys who they know can hurt them, and they will try to make hackers get themselves out on breaking balls or pitches off the plate.

Given these trends, how would we expect a normal hitter to respond? Regardless of whether the player in question is A, B, or C, we'd look for something like this:

Now let's look at how Yuniesky Betancourt has responded to these trends:

There's a reason why pitchers keep giving Yuni fewer and fewer pitches to hit: he hasn't wised up. With a given hitter, you'd expect that opposing pitchers would eventually reach a balance between fastballs and non-fastballs, and strikes and stuff off the plate. They'll get to the point where throwing more hittable pitches leads to more hits, and throwing fewer hittable pitches leads to more walks. There has been no such point for Yuni, though - not yet - because he hasn't forced it. He's just turned himself into an easier out, and as pitchers have searched for the balance point, Yuni has gone after more and more bad pitches, meaning that there is still more to be gained by pitching out of the zone. Yuni might explain away his slow start by pointing out how he hasn't been given much to hit, but that's his own fault, because he hasn't done anything to earn those pitches. If you go after balls, then you'll get more balls.

Here's what things look like in heat map form. First, we see a comparison of pitch locations against Yuni between 2008 and 2009: 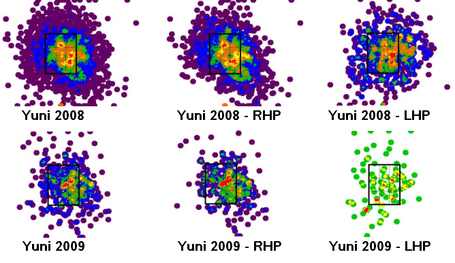 You can go ahead and ignore the lefty images, since we don't have a good 2009 sample size yet. Take a close look at the two righty images. In 2009, notice that righties have gone away from both the inner third and the mid-upper box. They've also spent less time trying to get him to chase stuff low and away. In lieu of pitching to those spots, they've targeted knee to mid-thigh height while working in or beyond the outer half.

Has Yuni been cooperating? Here are heat maps for the pitches he's chased: 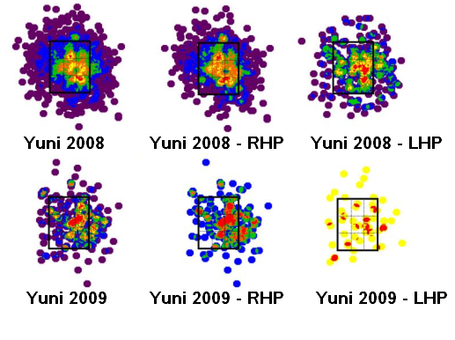 Once again, you can ignore the lefties. Now look at the righty images. Not only has Yuni been going after those pitches on the outer half of the plate; he's also been going after the pitches at the same heights outside. There's an awful lot of red there that isn't in the strike zone.

It seems to me that, while Yuni's okay at gauging pitch height, he has a poor idea of the outer boundary of the strike zone. Anyone who's ever played baseball will tell you that the hardest pitches to lay off of are the high fastball and any outside fastball or breaking ball from a same-handed pitcher, and though Yuni's been known to pop up on those high fastballs from time to time, his real problem is the latter. If you give him something at the right height that's outside off the plate, chances are he's going to go after it and either miss or put the ball in play weakly.

I imagine that pitchers work Yuni away because (A) he'll chase balls, and (B) he's a pull hitter who doesn't do much damage going the other way. Here are his career splits against the righty-hitter league averages:

Over his career, Yuni's been some approximation of league average at the plate when he's been able to pull the ball, but he's lost his power going up the middle and he's lost everything going the other way. With this kind of performance, then, it only makes sense that pitchers would start working Yuni away. Pitch him away and it's very, very unlikely that he'll be able to hurt you.

What has Yuni done to get better? To his credit, he's hit .302 going the other way in 2008-2009, but that's with a small 96 AB sample size, little power, and a worse performance on balls pulled to left, suggesting that he's been trying to pull some of those outside pitches, with poor results. So while he has hit a little better going to the opposite field, that doesn't necessarily mean that he's gotten a better handle of outside pitches. Especially considering how many bad ones he tends to go after.

Ultimately, if Yuni wants to improve his productivity at the plate, he'll have to earn more inside pitches, because pulling the ball is the only way he'll ever be able to hit for any power. The way to earn more inside pitches is by doing some damage on outside strikes and laying off of outside balls. Yuni hasn't done a whole lot with outside strikes, and worse, he's gone after countless outside balls - more than ever before. The result is his current .265/.276/.345 batting line. It isn't bad luck - he has a .284 BABIP and the second-highest infield fly rate in the league. He's earned this line. He's earned this line because he's been playing right into the pitchers' hands. By chasing everything outside and doing so little with the pitches he hits, he's given pitchers zero reason to throw over the inner half.

Yuniesky Betancourt came up as a defensive magician with a contact bat that could play to the gaps. Now he's one of the worst defensive shortstops in baseball, with a -6.4 UZR through 31 games despite an offseason of workouts, and his terrible approach and zone recognition are crippling his ability to do anything at the plate. Pitchers have keyed in to his weaknesses as a hitter, and he's done nothing to stem the tide. At this point, I'm done. I give up. While Yuni will have the occasional good game and earn the occasional cheer, he's into his fifth season in the Major Leagues and he's done nothing to improve and a lot to get worse. Defensively, he's slow. Offensively, he thinks his job is to make contact instead of do what he can to produce runs. The combination of everything makes for one hell of a lousy player, and while it's Carlos Silva who draws the ire of many a Mariner fan these days, it's Yuni who might be the bigger problem - not just because he's gotten so bad, but because he's wasted so much talent along the way. Silva makes me mad. Yuni makes me furious.