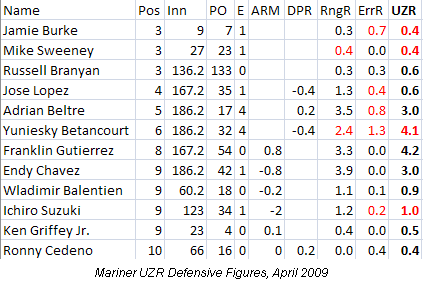 Seriously. Flyballs are falling for hits just a tad over once per ten times. The league average BABIP on fly balls in .141. The Mariner outfield has saved eight hits from dropping in just 22 games. That's about seven runs of value, which projects to about 51 runs over a full season.

It's a good thing these guys can field (except for you, Yuni) because outside of Branyan, they have been sucking at the primary portion of their job. Second to last in baseball ahead of only Oakland (and thank you for that), the Mariner hitters are bad. The scary part is that they haven't even been unlucky really either.

Mariner hitters have a team BABIP of .295 and a team LD% rate of 18%. In fact, as far as run scoring goes, they've been lucky with a .335 BABIP with runners in scoring position. So while they are not due for regression from flukey categories, they are probably due for some improvement in the form of talent boosts. Adrian Beltre is a better hitter than this. Ichiro Suzuki always tends to start a touch slowly. Other than that though, we're looking at what our offense is likely to be. This team needs a hitting Jeff Clement at catcher in a bad way not only for match up purposes but also just to get more offensive upside in this lineup.

A key factor driving the offense down, and one that will hopefully start moving the opposite direction under Wakamatsu's harsh criticism, is the team's plate patience. At 3.63 pitches seen per plate appearance, the Mariners rank dead last in the American League and third worst in all of baseball (The Braves and Cardinals see fewer). There are some key players that I expect to help drive that number out of the basement.

Aside from those three, there's some other random notes.