Changeups are pitches that rely mostly on deception. Ideally, when a pitcher throws a changeup, they exhibit the same arm motion as when they are throwing a fastball. The pitch itself will also come out of the pitcher's hand with roughly the same relative spin and movement as a fastball. From a pitcher's point of view, the purpose of the changeup is to scream fastball, get the hitter to commit to the coming fastball and then have the pitch come in markedly slower. It kills their timing, not only on that swing, but forces the hitter to react slower to the fastball when it does come because they have to spend a little extra time processing if it's a true fastball coming in or not.

Problems can arise though if that deception falters. Typically what causes that if the pitcher, in an effort to increase the speed gap between his fastball and changeup, slows down his arm. Major League hitters are incredibly adapt at picking up those subtle clues however and as a result are quickly able to discern that a changeup is coming. Without the deception, a changeup comes in more like a batting practice fastball with predictable results.

Keeping in mind that the main key to fooling the batter with a changeup is the speed gap between that pitch and the fastball, take a look at these yearly (2005 up to 2009) progressions for Felix Hernandez.

I am not worried about the dip in fastball speed, it's early in the season and it's prone to small sample size issues if Felix relied more on his two-seamer. I am worred however at the average gap from fastball to changeup over time: 11, 10, 9, 7, 5. Right now there's a 4.8 mph difference between Felix's average fastball and changeup. That's less than half what it used to be a few years ago.

This next part is going to be a bit simplified. I am not trying to put a pure scientific effort into this, that would take tons more effort, but instead am trying trying to illustrate a rough idea. 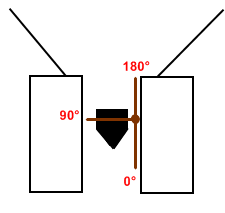 In theory, because of the how swing mechanics work, the batter's ideal bat position at contact is between 90 degrees, (perfectly square) and 120 degrees or so (pulling the ball); that's the zone where his batspeed is often peaking, which is a key factor toward driving the ball further distances. The batter will attempt to time his swing so that his bat is in this zone when the pitch reaches home plate.

In practice though, batters facing a live fastball and a threat of a legitimate off speed pitch will sometimes concede the idea of pulling the fastball unless they get a good read on it. Instead, in those cases they will settle for being late on the fastball in order to increase their chances of making contact with the off speed pitch should they get fooled. This is why you can see David Aardsma pipe in 12 consecutive fastballs and the hitters are late on all of them.

The "fair zone", the angle the bat can be held and the ball kept fair, is roughly between 70 and 110 degrees on the diagram above. The reason it is not between 45 to 135 degrees (the angles of the foul lines) is due to two primary factors.  First, the spin imparted on the ball in those cases will tend to cause the ball to tail or hook toward foul territory. Secondly, the ball will deflect off the bat at the same angle that it hits it (see pic to the right). Of course, this is still a crude outline of the whole process.

67 milliseconds to complete a 180-degree arc means that the bat will be traveling roughly 2.7 degrees every millisecond (it's not actually constant, but again, keeping it simple). In the 41ms of difference between a 94mph and an 85mph pitch, the average swing will cover 110 degrees, which is too big of a gap to make up unless the hitter adjusts and slows down his swing or delays the start of his upper body swing, sapping some bat speed. Instead though, Felix's changeup is only showing a 21ms difference, a period of time during which a bat will only cover 56 degrees.

That's still quite a bit, but as noted above, if the batter is conceding being late on the fastball and doesn't adjust his timing when the changeup comes, his bat is going to be near the position to yank-pull the change down the line. Felix could perfectly fool the batter in this case, getting the hitter to key on the fastball, but because the timing gap isn't large enough, the hitter could still possibly make good contact on the changeup. This is why people talk so much about fooling batters by changing speeds. As Jamie Moyer shows, it can be practically your only weapon, but it's one hell of a weapon.

Right now, Felix is losing that weapon when it comes to his changeup. It's still too early to tell if that's going to end up being a problem results-wise, but from a scouting perspective, it does not seem good. I am all for Felix varying his fastball speeds a la Jarrod Washburn, but that's assuming he can still keep hitters further off-balance with a mid-80s change in addition to his high-80s slider and low-80s curve. But if his slider, changeup and 2-seamer all start to run together on the radar gun, then Felix just has their differing movements to make batters miss. That's probably still enough for Felix to get by because he does have incredible movement, but if he can re-couple that movement with changing speeds, it's going to make everything more effective.

I'm not sure what might be causing Felix's changeup to get faster and faster, I have my concerns that even Felix might not know, but we do know that he is at least aware of it. That's an important part, that Felix recognizes it might be an issue. Now he, or the coaching staff, just needs to do the actual fixing.