I didn't get to watch much of this game, since the bulk of it took place while I was at work or commuting home, so all I'll say is that this looks an awful lot like a game plan gone right. Felix vs. left-handed hitters today, from BrooksBaseball.net: 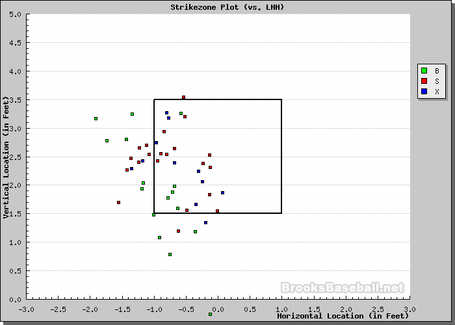 Against Tampa's dangerous Pena/Crawford/Iwamura/Zobrist/Navarro lefty quintet, Felix lived on the outside of the zone, never daring to throw so much as a single pitch over the inner half. The results? 67% strikes, 73% grounders, zero line drives, and six swinging strikes. While Felix is a guy you'd expect to have a normal platoon split, today he was far more in command against lefties, and when you combine that with a few timely strikeouts of righties, you've got all the ingredients for a dominant game. A terrific effort when the Mariners could afford nothing less.

By the way, Felix has gotten to an 0-1 count in 52% of his plate appearances this year, up from 47.6% for his career and the 47.3% league average. I'm going to go ahead and hope against hope that this means he's locating better. Felix getting ahead in the count more often means all kinds of things. Unhittable things.

Oh hey I have another note! You may never see a better version of David Aardsma than you saw this afternoon. His showdown against BJ Upton was shades of Rafael Soriano vs. Nomar Garciaparra, only without all the context that made Rafael Soriano vs. Nomar Garciaparra so awesome. A lot of times when hitters miss on a fastball, they miss ferociously. Upton and Crawford swung like sissies. Neither of them looked even the least bit comfortable, although in their defense I don't know why anyone would be comfortable hitting against a crazy person with a rocket launcher.