Sometimes it can be difficult to tell where a game turned. Sometimes the turning points are so obvious that they raise their hands and go "ooh ooh! ooh!" and burp the alphabet. Tonight was more the latter than the former. This game wound up feeling like something straight out of 2008, but had it not been for two particular at bats, there's no telling how it would've wound up. 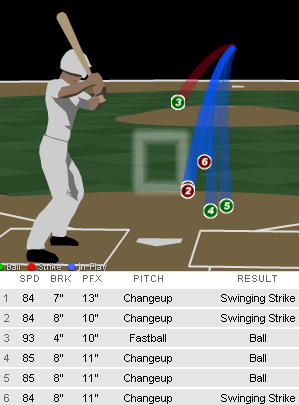 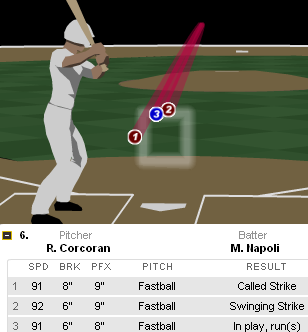 The first at bat you may recognize as Wladimir Balentien vs. Joe Saunders in the bottom of the fourth. At the time, the Mariners were ahead by the slimmest of margins, but had the bases loaded and were threatening to take a sizeable lead. Saunders came in having intentionally walked Jose Lopez and having beaned Russell Branyan, but instead of taking a pitch or making sure that Saunders started him off with a fastball, Wlad chased the first offering, which wound up being a low-away changeup just out of the zone. This put him behind and made him a little nervous, so Wlad chased the next pitch as well, which wound up being pretty much the exact same thing. Behind 0-2, Wlad all of a sudden found himself in a world of hurt. He partially redeemed himself by taking the next three pitches and forcing Saunders into a pickle, but then yet again Wlad bailed him out by swinging at a bad pitch to end the threat.

I don't mean "bad pitch" as in something Saunders shouldn't have thrown - Saunders very clearly knew what he was doing and he played Wlad like a fiddle. I mean "bad pitch" as in a pitch at which Wlad shouldn't have swung. Depending on how you interpret the strike zone, the best-case scenario is that Wlad swung at ball four, while the worst-case scenario is that he didn't see a single strike in six pitches. A lot of people automatically assume that a long at bat is a good at bat, but this was a terrible showing by Wlad, and it threw away a chance for the M's to blow this game open.

The second at bat is Roy Corcan vs. Mike Napoli in the sixth. Here the Angels had the bases loaded and two outs in a game they were trailing 1-0. Corcoran got way ahead with an inside fastball and a miraculous swinging strike, but instead of going with a low-away breaking ball or at least trying to bury a sinker, he threw a belt-high heater over the inner half of the plate that Napoli drilled into center field to plate the decisive two runs. This wasn't a case of good pitching being defeated by better hitting - this was a case of bad pitching being defeated by normal hitting, as pretty much any self-respecting hitter in the big leagues feasts on that pitch. Corcoran is a groundball pitcher. He's a groundball pitcher because he's pretty good about keeping his sinker out of the wheelhouse. He put this one right where Napoli wanted to hit it, and he put it there in an 0-2 count. That's not a good way to hold on to your roster spot.

Two at bats, two significant turning points. Everyone ought to be sick of this word by now, but when you come in with an average of .362 with RISP and an average against of .191 in the same situation, that's what regression looks like. It was just a matter of time before the M's got caught. We've seen the offense get a few too many timely hits and we've seen the bullpen get a few too many timely outs, so we knew this was bound to happen. It's just damn ugly when it does. The hazards of following a team predisposed to close games, I guess. While there are going to be a lot more Tuesdays down the road, there are also going to be a lot more todays.

This is going to be a tense summer of baseball.

Felix Day tomorrow. It'd be nice to end this losing streak before it gets overwhelming. It feels like ages since we've won a damn game.