Now this comes with tons of caveats. It's one game. It's the first game for Ryan. It was somewhat chilly. It was the first game in Oakland so we don't yet know if there's any correction needed on the pitch f/x gun. That's just a few of the warnings.

Nevertheless, this is not the chart that I wanted to see 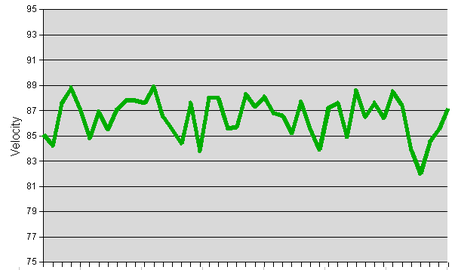 I'm not totally sure on some of these pitches, namely toward the end when there was a pitch clocked at 82, but I'm not sure what else it would have been given Ryan's two other pitches (change and curve) are both well below 80mph and based on the spin, it looks like a fastball.

Overall, Ryan threw 45 fastballs (out of 82 total pitches; that's a good mix at least) at an average velocity of 86.5mph. That's about two miles per hour off where we would like to see him sit. It's nothing worth panicking over, but since it was about all I was looking for tonight I figured I would share.