Ichiro at the WBC

Smiles! Genuine smiles! And not even a glimmer of an indication that he and his teammates share a mutual contempt!

As best as I can tell, there are three ways in which one may attempt to relate Ichiro's success with Japan to his career as an M:

I don't know which is closest to the truth, but even if it's #1, the fact of the matter is that Ichiro's trapped here and he's never getting out, so my recommendation to you is to set aside any concerns you may have regarding Ichiro's feelings towards Seattle and celebrate his complete and utter awesomeness. Last night he delivered maybe the biggest hit of his career, and one of the most significant hits in the history of Japanese baseball. Ichiro drove his team to victory, and those smiles - he earned those smiles. Watching Ichiro humanize himself the way he did after the final out only makes me hope that much more that someday he's able to be that happy as a Mariner. More than anybody else, he deserves it.

Go Ichiro. You may not have had the best tournament as a whole, but your performance in the title game could not possibly have been more vintage you. Way to go, little dude.

My favorite picture of the bunch has to be this one: 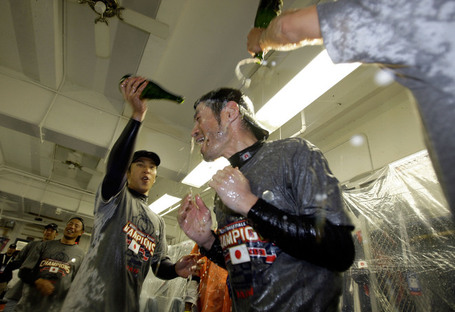 The guy on the left gets an A for effort but an F for execution. And I like how the people in the back are just hanging out while Ichiro gets the champagning of a lifetime. Half the people in that clubhouse would probably get drunk just by wearing his t-shirt.