Share All sharing options for: The Seattle Mariners Win The World Series: Day 2

Several years ago, back when Kazaa was my .mp3 downloader of choice, I was searching for NHL goal horns when I stumbled across this audio file. It's a clip from game six of the 1998 Eastern Conference Quarterfinals between the Ottawa Senators and the New Jersey Devils. If you listen, you'll hear Ottawa's Igor Kravchuk score an empty-net goal with less than a minute to play. This was the goal that sealed the series, as the 8th-seeded Senators upset the 1st-seeded Devils in clinching their first playoff series win in modern franchise history.

I have cherished this clip. Ever since I first found it online, I have loved it; loved it like I do my family, and like I never did my parakeet. Loved it so much that it was often the first thing I heard after waking up and last thing I heard before going to sleep. Loved it because the feeling it stirred within me was one of pure, unadulterated, consummate happiness. Last winter, when I asked my girlfriend to justify listening to Coldplay, she told me that Viva La Vida was a great morning song for her, that no matter what was going on in her life, it put her in a good mood to start the day. I told her that I understood, because I have a morning song too. I played it. After a few seconds, she turned to me and said "this is a hockey game." I smiled.

I haven't listened to the clip in weeks.

Early yesterday afternoon, a few hours before the first pitch, my brother called. We got to talking about the game, going over the starting pitchers and lineup possibilities and various things that might end up being the key to victory. I was kind of half participating and half standing with a phone to my ear. I tried to be analytical, but my brain wasn't cooperating, having decided on its own back in September that any key to any game favored the opponent. Regardless of the situation and the matchup, the Mariners were fucked, and each additional day they survived was tantamount to the executioner missing with his axe. Bought time doesn't change the inevitable. This is how my brain thought best to deal with success. Even in times of triumph, I was still preparing myself for certain defeat.

Shortly before hanging up, my brother asked if I was going to go anywhere to watch. I thought it a silly question. A lot of people like to watch their teams from a bar, but while I can manage that during the regular season, the playoffs are a different animal, and I can't imagine ever having that desire. For one thing, the last thing I want to do during an important game is drink. I don't want my feelings to be numbed - neither the good ones nor the bad ones. I want everything to be authentic and feel exactly as it should. I may not demand purity of my favorite teams and athletes, but I demand it of my experience watching them. And for another thing, sports are very personally significant to me, and my viewing behavior tends to be rather expressive. The kind of expressive that ought not be exposed to the public. When watching an important game, I want to be free to shout, curse, and destroy, and as such I find the most suitable environment for me is within the comfort of my own home.

"No," I replied. "I'm going to stay here. You should probably call Mom and warn her not to drop by the house tonight."

Time dragged. It was like the first pitch was never going to arrive, and it was all I could do to keep myself from climbing onto the roof and diving headfirst onto the driveway to ease the suspense. I thought about different ways to pass the time, but didn't do any of them, passing the time instead by thinking about different ways to pass the time. Finally it got to be fifteen minutes to first pitch, at which point, having learned from experience, I visited all the neighbors to issue an explanation and preemptive apology. I don't know why I've made this a habit of mine - saying I'm sorry doesn't make little Timmy un-hear that Tyler Walker is a fat shitsucking fuckmotor - but it's become a playoff gameday ritual, and like hell am I going to change anything I'm doing when my team is one win away from a motherfucking world championship. I'm not ordinarily a superstitious person, but this was hardly a time to take my chances.

I got back home. I turned on the TV. I sat down. And I watched the Mariners win the World Series. 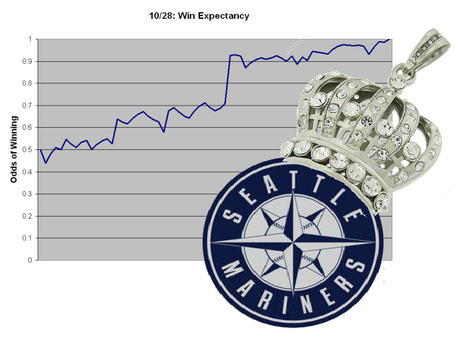 It's tempting to look at that chart, and look at the box score, and think in hindsight that we had it pretty easy. That the Mariners were always in control, and that from the sixth inning on they had the game in hand. If you'd have asked me a year ago about this, I would've said "that's a pretty lame way to win a championship," because the Jeff of a year ago thought that a fan's quality of experience was measured by the number of emotional swings caused by sudden score changes and pressure situations. The Jeff of a year ago wouldn't have wanted the clinching game to seem this comfortable. But it wasn't comfortable. At no point was it anywhere close to comfortable, and while it's possible that winning on a walkoff may have slightly enhanced our experience, there's not a single Mariner fan on the planet who's going to say we missed out. The WE chart lies. Every pitch in this game carried the weight of a hundred, and in the end, the true measure of one's viewing experience is the ratio of time spent hearing the announcers speak to time spent hearing yourself breathe while you stare fixedly at the screen with your chin in your hands. I rubbed my thumbs raw with my stubble.

Watching the final out - I've been happy before, but until yesterday I'd never actually felt the happiness signals come out of my brain and spread to my limbs. My body seemed to tense and relax at the same time, and, not knowing what else to do, I pumped my fists, shouted, and jumped up and down a lot. You see the little digital fans do things like that in the stands in EA Sports video games and you think it looks stupid until you actually do it yourself. Turns out it's basic human instinct. It's innate in all of us, as though there's some evolutionary benefit to responding to awesome moments by acting as white as possible. To anyone watching me celebrate without being able to hear me yell, it probably looked like I was saying "hooray!" Why our arms? Why do our arms go up automatically? If we saw someone celebrate by doing cabaret kicks with his legs, we'd all think he looks crazy, but is it really any different?

After I stopped jumping, I collapsed backwards onto a big pillow and was immediately faced with a dilemma. All my life I've told anyone I've ever met that, when one of my teams finally wins a championship, I'm going to streak. No matter where I am or who I'm with, I'm going to take my clothes off and run around naked in ectasy. It always sounded great in theory, but now confronted by the circumstance in question, I froze up. Unsure of myself, I called my girlfriend, who expressed her delight at my happiness and reminded me that I probably wouldn't want to spend the happiest night of my life in jail. I agreed with her and hung up. When you rationalize streaking, and really think about the various costs and benefits, it's very rarely a good idea, and certainly not a good idea when celebrating a Mariner championship in a suburban San Diego community built on a hill. The tricky thing about living on a hill is that at some point you always have to ascend, and no streaker wants to be caught out of breath.

If a million different variables take you to a single known result, and you like the result, you can't wish that any of the variables had been different, because changing the variables jeopardizes the integrity of the equation. And so, as a fan, you exist in the rarest of states - the state of being happy with every single part of your team. Even if you know that a player was bad, that bad player was a part of the team that won it all in the end, and so it's impossible to be critical and remarkably easy to thank. I didn't think I'd ever find myself thanking Carlos Silva, but I did, and I couldn't have been happier for it. Carlos Silva and the Seattle Mariners won me a World Series.