A Preemptive Rebuttal Of The Next Non-Story Story

Share All sharing options for: A Preemptive Rebuttal Of The Next Non-Story Story

Behold the shiny new stance of one Jose Lopez! 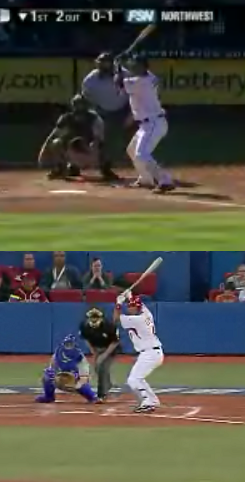 Above you see Lopez batting last September. Below you see him in last Saturday's WBC game against Italy. Notice that his feet are more closed and his back elbow is lifted slightly higher. It almost looks kind of like... 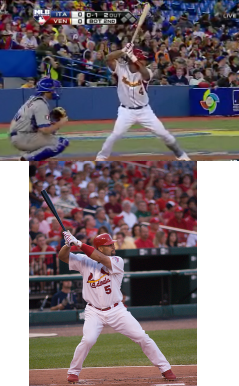 Lopez has always been a popular guy among a certain fraction of the fanbase, and given that he just put up a solid 2008 at the plate and is currently 7-9 with five doubles and a homer in the WBC, I wouldn't be surprised if some people started pointing to his new stance as evidence that he's beginning to figure things out and is on the verge of an offensive explosion.

I'm not saying that batting stances can't or don't make a difference. Sometimes a change can make a batter more comfortable or give him better timing. But changes as slight as the ones that Lopez has made aren't going to lead to a breakthrough offensive season. If Lopez puts up a crazy 2009, it won't be because he moved his front foot or raised his back elbow - it'll be because he figured out how to identify which pitches are which, and whether or not they'll end up in the strike zone. That's it. No matter what Lopez does with his body in the box, his offense will only ever be as good as his eye.