Where The Mariners Stand As Of Right Now

Share All sharing options for: Where The Mariners Stand As Of Right Now

Most players aren't big additions. Cliff Lee's a little different. With the understanding that these are nothing more than educated approximations: 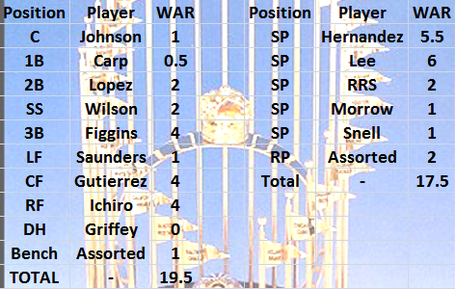 You can quibble with individual projections if you want to. I don't claim to hold the truth in my hands. But while one or seven of them may be off by a little bit, I think the overall picture is reasonably accurate, and the overall picture puts us around 85 wins. In other words, unless I'm way off, the Seattle Mariners right now are a mid-80s win team on true talent, and that's before accounting for whatever additional moves they make for a first baseman, a DH, and/or anything else. They do still have something like $10m(ish) to work with, assuming no sudden bump in payroll. Bring in, I dunno, Nick Johnson or re-sign Russell Branyan or whatever and all of a sudden we're getting dangerously close to 90. And who the hell knows what other aces Jack might have up his sleeve?

I don't know where the Angels or Rangers (or A's) stand in this regard, as I haven't done that analysis. But what I can tell you is that none of our divisional competition is much better than us, as Cliff Lee just made the M's better by several wins. By the end of the offseason, the Mariners very well may be considered the favorites to win the AL West. And I mean legitimate favorites.