Baseball, Life, And The Worth Of First Impressions

Share All sharing options for: Baseball, Life, And The Worth Of First Impressions

Driving home from work today, I found myself in some approximation of bumper-to-bumper traffic when a guy in a sports car to my right floored it to get ahead of me and merged into a 15-foot gap without signaling. Per usual, it pissed me off, and I spent the next half mile thinking about what I could do to him if I could catch up. I could flip him off. I could smirk and wave dismissively. I could throw a banana peel I had on the seat next to me at his windshield. I wanted to catch up bad. I wanted to catch up and teach him a lesson about being an asshole.

Drivers who pull those sorts of stunts bother me to the point where sometimes I've memorized and made note of their license plates so that I could indulge in a fantasy where I track them down at their houses. But this isn't about annoying drivers. This is about the human compulsion to judge other people based on very limited information.

People love to judge other people, and they love to arrive at these judgments so quickly that our culture has come to recognize and embrace the significance of a good first impression. When you're applying for a job. When you're meeting the parents. When you're on a first date. A good first impression can open doors while a bad one can lock them, and this isn't really something that people have ever questioned; rather, it's something that most people are happy to go along with, accepting that it's just a part of living life. In the past I've gone so far as to gloat about how important it is for people to make a good impression on me if they want me to like them.

And the nature of first impressions is that they're being made all the time, by everybody, to strangers. The man in the sports car this afternoon, for example, made a bad one on me, and presumably on others. The same goes for someone that talks on his cell phone too loud. A good first impression will be made by someone that, I dunno, holds a door open at the grocery store. People are always making impressions on other people, and in so doing are being judged on their actions.

But it's not that we judge their actions. We don't think "it was nice to hold the door open," or "it was a dick move to pass me on the street." We think "that woman is a good person for holding the door open," or "that guy is a prick for passing me on the street." We have a tendency to arrive at these sweeping conclusions based on very limited observations of behavior, and too often we celebrate these conclusions as being evidence of our perceptiveness. "Adam didn't say very much at dinner. He's kind of jerk."

Evolutionarily, you can kind of understand where this might come from. In nature, it's necessary for one to make snap judgments about another so that the former knows whether it's safe to proceed. If the other animal seems non-threatening, you can go ahead and eat the plant. If the other animals is a potential predator, it's best to avoid it at all costs. In nature, every being has to think quickly, or else it may shortly no longer be able to think at all.

But we don't really live in nature anymore, nor do we encounter frequent situations in which we're met by a possible predator, so the tendency to arrive at these snap judgments of another isn't nearly as important anymore. We can afford to take our time. We can afford to take our time in evaluating other people, and as such it seems like first impressions should play a far lesser role than they currently do.

The reason I'm posting this on a baseball blog is that it was baseball that got me thinking in this vein in the first place. Consider the scout. A scout will observe a potential draft pick over a small number of games. Maybe one game. Maybe four games. And based on these games, the scout will file a report on the player that goes back to the organization. This report will in large part determine where the player goes on the organization's draft board.

What of the scout that catches a pitcher on a day that he has the flu? What if he's watching a talented hitter who maybe strikes out against a couple breaking balls and goes hitless? What if he's watching a worse hitter who maybe stays back on a breaking ball and hits it for a single? Scouts are hired based on their skill in player evaluation, but they are limited to their windows of observation, and sometimes those windows can paint a remarkably misleading picture.

What of all the scouts that saw Ichiro in his first Spring Training and called him a bust?

We - the more statistically-inclined and forward-thinking baseball community - insist on basing our evaluations on all the available evidence, and if there isn't enough evidence, then this is reflected by our conclusions. But take us outside of the realm of sports and we start to act more like the rest of the population, judging people on one or two acts and a ton of alleged intuition.

First impressions are dangerous. They're dangerous because they bias you in one direction or another when these biases aren't justified. They can open you up to people who may not be very good, but worse and more often, they can close you off to people who have a whole lot to offer. One of my best friends is a pastel polo, pink hat-wearing Red Sox fan from Massachusetts. She possesses a number of characteristics I ordinarily consider off-putting, and it was only because of situations outside of my control that I got to know her better and realized how great she is. Left to my own devices, I doubt she'd be a friend of mine today.

That sucks. By believing so heavily in the significance of a good first impression, we are costing ourselves some potentially excellent relationships, because by and large we ignore the odds and see everything in black and white. This is probably best expressed in graphical form: 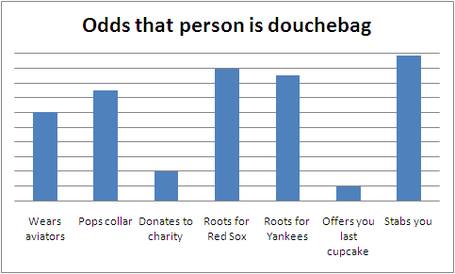 Any single act by another person gives us insight into that person's true nature, but there are very, very few acts - perhaps none - that give us an absolute answer as to whether or not the person is worth getting to know, or whether that person is romantically compatible, or whether that person is worth flipping off on the freeway. And so it is only by accumulating a wealth of information that we can approach a valid answer. A wealth of information that doesn't often fit into one act or one conversation or one first date.

Think about your worst qualities. We all have them. For example, I'm short-tempered. Sometimes I'm obliviously inconsiderate. I have a bad memory and things often slip my mind. Now think, would you want to be judged on these, or are you allowed to have the occasional bad day where your positive qualities might not show through? Shouldn't you then afford others the same courtesy? There are any number of innocent or perfectly acceptable reasons for why a person may act or appear in such a way that we perceive to be obnoxious, and it seems to me that we should try harder to give other people the benefit of the doubt, because the risk is minimal, and the reward is potentially gargantuan. Everybody has bad qualities. Where we fall short is in determining whether or not the positive qualities outweigh them.

Try not to consider this preaching. I'm not preaching, because I don't take my own advice. I got mad at that guy in the sports car. I wish ill on the woman in front of me who ordered the last chocolate croissant. But I'm trying to get better. I'm trying to get away from being so damn judgmental, because the truth of the matter is that there isn't a benefit. How does writing off another person based on limited interaction help in the least? There is far more to gain by opening yourself up to other people than there is to lose, and just being aware of this...I don't know if I'll ever be able to reverse my wiring, but I feel like I have a chance. And that makes me happy.

Time. In life, as in baseball, you need to give people the time and the opportunity to prove what they are. Don't, and you may find yourself running through Times Square in a thong.