Ichiro Suzuki's walk total this past season, 32, marked his lowest total since his inaugural 2001 campaign. Granted, he had fewer plate appearances this season than he's ever had in America, but even as a rate, his walk numbers were down. 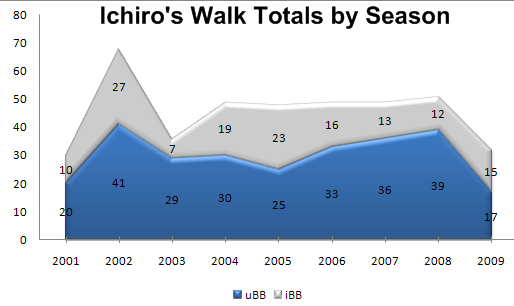 Using rates, Ichiro drew a walk in 4.7% of plate appearances, (2.2% intentional and 2.5% unintentional). It was the highest rate of intentional free passes since his 2005 season, which is no big surprise there. Ichiro was great this year. It is somewhat of a surprise when you consider who was batting behind him though. Franklin Gutierrez and Russell Branyan both had 55 starts apiece in the second lineup slot and neither of them would be considered offensive slouches.

Still, Ichiro's 2.5% unintentional walk rate was by far the lowest mark of his career, even lower than that 2001 season (2.7%). Is that a cause for concern going forward? After all, we don't expect Ichiro to post a .384 BABIP each year, so we would all rest a little easier if he didn't need to bat in the mid .300s just to have an above average OBP.

On the surface, this would have seemed a good year for Ichiro to post a banner year in the walks department. Afterall, he was thrown first pitch strikes at the lowest rate since 2001 and was thrown strikes overall at the lowest rate of his career, continuing a three year trends that has seen pitchers suddenly shift away from throwing him more strikes than average.

Unfortunately, Ichiro responded to these extra out of zone pitches with more swings. His 48.9% swing rate is back up to his 2001-5 level after a three year hiatus. Interestingly, it appears to be a roughly equal jump in swings at both strikes and balls as you see his Z (strike) Swing% jump 3% and his O (ball) Swing% rise 3.4%. Coupled with a decrease in contact rate (mostly on pitches in the strike zone curiously), and you have a recipe for both more strikeouts and fewer walks. Ichiro posted his worst-ever contact rate when swinging at pitches in the strike zone and he also posted his worst-ever swinging strikeout rate.

There was a slight dip in his contact rate on pitches outside the zone as well, but I am not concerned about that as the drop was small and it still leaves Ichiro at a super high level. In fact, I wonder if Ichiro's prowess at making contact at pitches outside the zone has given him more confidence to swing in general. Compare 2004 to 2009, Ichiro swings at almost twice as many non-strike pitches as he did back then and at fewer strike pitches. It would be nice to see him go back to those levels.

Regressing his 2009 BABIP to his career level costs him 14 hits and 20 points of batting average and that represents a sizable slice of his OPS gone. Now I don't want to come across as saying Ichiro needs to draw more walks in 2010. He could hit for more power. He could maintain his high BABIP. He could steal more bases. There are lots of things Ichiro, or anyone, can do to improve their game in the face of a declining isolated discipline. It's just... it would probably be a lot easier to just draw a few more walks. We know you can avoid swinging at those non-strike pitches, Ichiro and it didn't seem to hurt your offense any.

I wonder if his missed time at the beginning of the season caused him to press a bit to collect base hits in order to ensure that he got to 200 on the season. If so, then perhaps he'd relax a bit next year and we'll see the walks go back up. Who knows, really? I learned years ago to stop actively worrying about Ichiro. One of these years, probably, we'll be able to look back and be able to point at some moment in time and say, "there, that's when he started to actually decline." That hasn't happened yet, but Ichiro's plate discipline numbers are going to be something that I will pay attention to in 2010.