Share All sharing options for: Remembering A Forgotten Mariner

So I finally got around to taking that quiz that Addicted To Quack posted a little while ago, the one that asks you to name as many 1990-2009 Opening Day Seattle Mariners as you can in 15 minutes. Those of you who wish to take the quiz without spoilers should probably stop reading this post. Those of you who have already taken it or who don't wish to take it may continue.

And so on. There are a lot of names in there, and as such, there are a lot of numbers to look at. The thing that caught my eye more than anything else, though, was the name at the very bottom. The name at the bottom of the list represents the most forgotten Mariner in the quiz. And as it turns out, the most forgotten Mariner in the quiz - defeating the bad Brian Giles by a narrow margin - is 1993 left fielder Mike Felder. Felder's name was included on just 59 of 906 ballots, or 43 fewer than Wilson Valdez, a last-minute stopgap who played all of 42 games. Mike Felder, it seems, didn't leave much of a lasting impression. 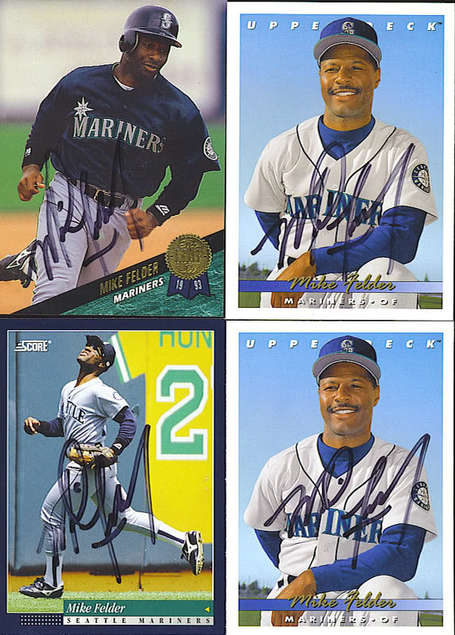 It's not that Mike Felder is the most disremembered Mariner of all time*. Not even close. Though showing up on 6.5% of all quiz entries isn't good, I have to imagine that far fewer than 6.5% of people can recall past pre-90s Mariners like Wayne Twitchell and Bud Bulling. But just the fact that Felder shows up at the bottom of a list like this is enough to count him among The Forgotten, and it's with that said that I'd like to take this opportunity to go over who Felder was and raise some awareness so that, when future generations of Mariner fans take this quiz, they might push his name up above that of a guy who came a decade too early to be a shitty impostor of somebody good.

* have you ever tried asking a group of fans "so which player in your team's history do you think is the most forgotten?" It's weird.

Michael Otis "Tiny" Felder was drafted out of Contra Costa Junior College by the Milwaukee Brewers in the third round of the 1981 January draft. Felder is listed at 5'8, 160, and given my memories of little doorways in old European castles and cathedrals and the fact that 1981 was a long time ago, I have to assume his nickname was ironic. Nevertheless, Felder was selected shortly after John Kruk and well before Oddibe McDowell, so as far as making it as a draft pick was concerned, he found himself in some talented company.

Unfortunately for Felder, it seems his particular selection that year was forgettable. So forgettable, apparently, that the draft link on his Baseball-Reference player page takes you to a list of names that doesn't have Mike or Felder anywhere on it. From the beginning, he was up against the odds. Felder would have to prove himself every step of the way if he wanted to get his big break.

Felder would get his break in 1985 after hitting .314 and running a ton with AAA Vancouver. He earned himself a late-season cup of coffee with the Brewers, and though poor performance got him demoted in early 1986, once you've had a taste of the Major Leagues, it's all you ever want. Felder worked hard to climb his way back, and sure enough, 1987 saw him make it as a regular in the outfield. He would appear in 108 games and make 328 trips to the plate, finishing second on the Brewers in both triples and stolen bases. Felder had carved himself a role.

A few years would pass. Felder appeared in 445 games with Milwaukee before asking for his release ("Sitting behind Robin Yount for five years in enough") and signing with the Giants as a free agent, where he would set consecutive career highs in games played. Granted free agency again in October 1992, Felder was a 31 year old speedy outfielder coming off a 107 OPS+ season, and after trading Kevin Mitchell to the Reds, the Mariners saw in Felder a guy who could fill a need. And so it was that Felder signed a two-year, $1.8m contract with Seattle. "Let me tell you, he's an exciting player," said new manager Lou Piniella. Woody Woodward sold the acquisition as helping usher in a new era of relevant and successful Mariner baseball.

Heading into the season, spirits were high. In Felder, the Mariners had a leadoff guy who could get on base and wreak a lot of havoc. It's too bad, then, that the biggest thing the Mariners were missing was a statistic that hadn't yet been invented.

The Mariners saw a speed demon who just hit .286. Math saw a guy who overachieved by 20 or 25 points, and when you combine probable regression with a guy on the wrong side of 30, sometimes you'll get Raul Ibanez, but more times you'll get Mike Felder.

Felder started off 1993 reasonably well. And by "started off" I mean that very literally, because his batting average dropped below .280 after 25 at bats and never recovered. By late May he was down to the .240s, by late June he was losing playing time, and come mid-August he went on the DL with knee tendinitis, with age and bad turf having taken more than their toll on a player whose strength was his legs. Unable to run like the minor league stolen base champion of his youth, Felder had trouble beating out grounders and running down balls in the gap, with the ultimate result being a sorry .531 OPS that didn't show any improvement when he returned from the DL in September. Though the Mariners were feeling pretty good about having had just their second .500+ season in franchise history, they were feeling pretty bad about their busted investment.

It didn't take long, then, for Woodward to find Felder a new home in the offseason. Felder's all-around miserable 1993 campaign earned him a second sentence on astroturf, this time in Houston, where he was dealt in exchange for Eric Anthony. Woodward wanted to unload a bad contract and bring in a young outfield type with power, so he put together a package of Felder and 20 year old southpaw Mike Hampton. Hampton, of course, turned out to be pretty good. Anthony didn't. One bust begot another bust, and the curse of the Kingdome left field lived on.

Every aspect of the Mike Felder story is a disappointment. Advertised as a game-changer, he wasn't any good, as injuries and age killed not only his time in Seattle, but his career. And the trade that got rid of him only brought more agony, as Hampton flourished while Anthony stagnated. Had Felder panned out, the Mariners would've had both an impact outfielder and a young lefty starter to slot into the front of the rotation. Instead, they wound up with neither, and while it isn't all Felder's fault, that's certainly one interpretation.

And this is why I think it's a shame that, today, Felder is all but forgotten. Yes, he was bad. The Mariners have had a lot of bad, far too much to remember every name. But Felder wasn't bad like Scott Spiezio was bad, or like Carl Everett was bad; Felder was bad like Jeff Cirillo was bad, or like Ben Davis was bad. Tied inextricably to his name is a great deal of blown hope. You think about Felder and you think about Anthony, and Hampton, and all the other left fielders we tried, and how things could've been had one guy just worked out. These are the sorts of names we should remember. The purpose of history is to warn us about the future. And out of the Mike Felder experience we learn lessons we shouldn't soon forget.

Edgar Martinez is Mr. Mariner, but as long as we all identify with the Sexson logo at the top of this page, then Mike Felder's is a name we can't allow to disappear into the ether.