The Cubs, unsure of whether they will land Padres right-hander Jake Peavy, are on the verge of a separate move to bolster their pitching depth — the acquisition of right-hander Aaron Heilman from the Mariners.

In exchange for Heilman, the Mariners will receive shortstop Ronny Cedeno and left-hander Garrett Olson, according to major-league sources. 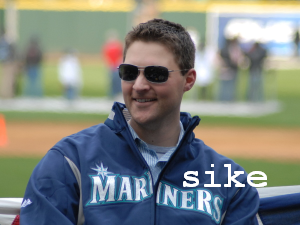 (credit to Deanna for the original image)

So Heilman's 49-day Seattle sabbatical is over, and he's off to what is perhaps an even more wild and intimidating environment than the one he escaped in the first place. In return for his charming smile and zero innings, the Mariners are receiving Ronny Cedeno and Garrett Olson (who the Cubs just landed a little while ago for Felix Pie. I hope you didn't unpack your bags, you tradable son of a bitch).

Cedeno's a soon-to-be 26 year old 2B/SS with 1000 Major League plate appearances' worth of Cesar Izturis's offense under his belt. He's hit poorly over parts of four seasons in Chicago, and the statistical record of his defensive performance spells him out to be somewhere around average. At first glance, he seems to be nothing more than a young utility infielder, and while that's something we needed, it's not particularly exciting.

If you look beyond Cedeno's Major League statistics, however, then you'll begin to see why Dave is so high on him. For one thing, he's been an effective hitter in the upper bits of the minors, holding his own in AA at 21 and then taking it to another level in AAA Iowa. Granted, the AAA batting averages are a little inflated, but you can see in Cedeno's line a good ability to make contact, some idea of how to walk, and limited but significant power. While he hasn't yet been able to translate his minor league success to the Majors, the talent is there, and it's not out of the question that he could out-hit our current shortstop. He just needs to improve his selectivity. Note that he and Betancourt are the same age.

And for another thing, Cedeno's got quite the reputation as a defensive whiz. Now, whether or not this is true is up in the air. His statistical performance in the Majors hasn't been bad, but it hasn't been real good, either, and the fans don't consider him to be any better than Mark DeRosa or Jamey Carroll. In other words, we're still looking for evidence that his ability fits his rep. However, if he really is, say, a 0 < x < +10 defensive SS (and therefore a +5 < x < +15 defensive 2B), then all of a sudden he doesn't really need to hit much at all to be a moderate value. That would make him a better player than Betancourt right now.

Cedeno is presumably being brought in as a utility infielder, a young guy with talent who's better able than Reegie Corona to back up a number of positions and spot start without hurting the team. However, the potential is there for him to be more than that, and like Luis Valbuena before him, he looks like solid insurance in case Betancourt or Lopez don't perform like the team hopes. No, there aren't any guarantees. His offense may never translate to the big leagues, and his defense may not be as good as some people say it is. Everybody's a risk, and Cedeno may be nothing more than a career reserve. However, he's a good bet, and he fills a need for which the organization didn't have any promising internal solutions. For those reasons, he's a neat addition.

As for Garrett Olson, I never even imagined that we could pull an ML-caliber starting pitcher out of this deal on top of a middle infielder. Olson put up an ugly ERA in Baltimore last season, but he's only 25, he's under team control for five years, he still has options left, and his 5.26 tRA was better than Jarrod Washburn's 5.72.

Olson's a three-pitch pitcher, with the typical left-handed sub-90 fastball, a slider, and a change. The change is used almost exclusively against righties, while lefties get the fastball and the slider in a 55/45 mix. It's important for him to regularly work in his offspeed stuff, because his fastball isn't good. He doesn't control it very well, and it hardly ever misses bats - he only generated 26 swinging strikes on 1225 fastballs a year ago, including just two on 328 against lefties. Garrett Olson's fastball thinks Felix's fastball was born on Mount Olympus. It's a necessary pitch, but it's not a special one.

His slider and change are useful, though, even to the point at which the slider makes for an effective weapon against righties. Most starters tend to throw a lot of changeups to opposite-handed hitters, but Olson still preferred his slider (15% sliders to 11% changeups), and both pitches were able to generated a fair number of swinging strikes while also finding the zone. So Olson doesn't look like the kind of guy who's going to run a nasty platoon split. If anything, last year he threw a little better against righties than he did against lefties. His location against LHB's could use a little work.

Work that he can get this year in Tacoma. Garrett Olson, right now, is probably on par with Washburn and RRS, but he's also a guy with a 2.8 K/BB and 8.8 K/9 in the high minors, and if he can bring more of that ability with him to the Major Leagues the next time he gets an extended opportunity, then all of a sudden we're not talking about a #5 anymore. We're talking about a #3 or a #4, a good starter under cheap team control for a long long time. Having a couple of those a year ago could've saved us $48m. They're incredibly valuable assets.

So, in exchange for a 30 year old righty with a bad 2008 and a desire to be thrust into an even more challenging role, Jack Zduriencik was able to land a utility infielder with the potential to start at 2B or SS and a #5 starter with the potential to improve by one or two slots. Two young players with good minor league track records that haven't yet translated to the big leagues, but that still have time to do it. It's possible that Cedeno doesn't develop any further. It's possible that Olson's career stays where it is. But it's also possible that we just traded a flame-out righty for two future regulars, and after weighing all the different odds in my head, this just strikes me as being a great, great deal. In the organizational big picture, it's all upside. Every last bit.