This has been, by far, the most physically and emotionally taxing season of my five-year blogging career. And as much as I'd like to blame it on the team being embarrassingly pathetic, the fact of the matter is that it's not that simple. Sure, the sucking contributed to the burden, but after landing a new job in March, for the first time I had to try and balance a full-time day job with what I consider to be a full-time night job, and take my word for it - it's not that easy. It's draining, and I can't tell you how many times I came home thinking to myself "the last thing I want to do right now is write about baseball." It was a challenge. It was a challenge that on many occasions I just didn't feel like facing.

I hold my writing and this website to a high standard. I always liked the way this place used to be, and I always liked being able to churn out massive daily recaps. When I realized I no longer had the time nor the energy to do that anymore, I got frustrated with myself. I started to feel like the content was slipping, that I wasn't meeting my own standards. On several nights I went to sleep wondering why I even bothered anymore. Why I still tried. I make fun of veterans all the time for hanging on when their talent has declined, and in my mind I felt like a hypocrite for basically doing that very thing. So I thought about quitting. Pretty often, in fact.

Then I'd try to picture my life without this place. And I never could. For better or worse, Lookout Landing has kind of become a major part of my identity, and I came to realize that this isn't the sort of thing that you just up and stop doing one day. LL means a lot of things to a lot of people, but it also means a lot of things to me, and every time I'd lay in bed thinking I can't do this anymore, I'd convince myself that it's worth the effort. Every time.

I don't know what my life would look like without LL, and I'm in no hurry to find out. I just need to get over the guilt I feel when I don't post enough content after a game. The guilt I feel when I take a night off to see a show, or watch the Padres, or hang out with my girlfriend, or just do nothing. It's getting better. It is getting better. I remember sitting in a bar with Teej not too long ago. At one point we started talking about the site, and he told me not to feel bad about slowing down, because he still enjoyed reading, and I was just putting too much pressure on myself. That was important. That conversation went a long way towards alleviating the guilt I felt for what I perceived to be slacking off. But I dunno. We were also drinking a lot.

I have slowed down. I've had to slow down. Thanks to this website, I've become acutely aware of my minimum sleep threshold necessary to still be a functional member of society the next day, and I just don't have enough time to put as much effort into this place as I used to. That's why I do less commenting during the day and less writing at night. It's why I switched from the recap format to the recent post-about-whatever-the-hell-you-feel-like format. Recaps were great, and they were my favorite part of the website, but they were a chore, and it got to the point at which I just couldn't do it anymore. Some sort of change was badly needed. Something to relieve the strain.

I can't thank you guys enough for embracing what this website has become. I was nervous about how the community would respond once it became clear that I could no longer do what I did,  but day after day you guys keep coming back to a website devoted to the most humbling and humiliating organization in sports, and that means a lot to me. It takes away a lot of that pressure, and it takes away a lot of that guilt. I don't like that I can't provide as much as I used to, but I am eternally thankful that, despite that, so many people still find this place worth reading. More than that, even; I am eternally thankful that so many people still find this place worth belonging to. Maybe it was presumptuous and arrogant of me to think that a change in content could really make that much of a difference, because the truth of the matter is that LL has grown into something so much greater than what goes on the front page. This is a community in every sense of the word. People hang out here. People make friends here. It's like a social networking site without the suck. Whenever I think about that, it just blows my mind.

I don't know how a little blog named after a nobody third baseman could turn into something so huge, but here we are, and I wouldn't trade it for the world. There are days that I hate it, but there are days that I hate my own mother, so I guess all I can really say is thank you, again, for making this place what it is. For the fifth straight year, thank you for hanging out. LL isn't LL without its community, and while the website has its little flaws, there is no other site on the Internets to which I'd rather belong. I love this place. Even when I don't.

Here's to a great October and the most important offseason this team has ever faced. Don't go anywhere. The fun is only just beginning. 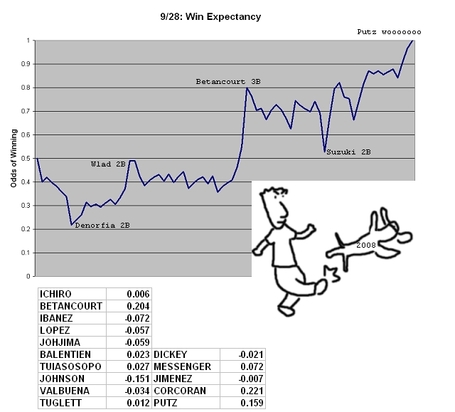