A quick little bit of research, made possible by the blessing that is StatCorner.com: 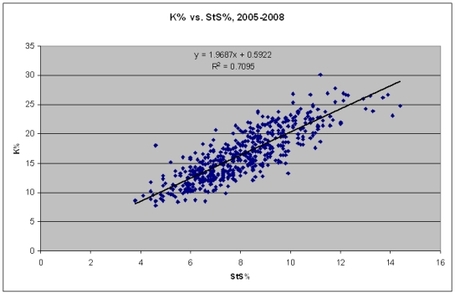 We've talked about the strong correlation between StS% and K% before. It obviously makes a lot of intuitive sense, but if you still weren't quite on the trolley, there's a neat little chart for you, including the last four years' worth of data (for pitchers with at least 100 xIP in a season).

Bottom line: the more swinging strikes you get, the more strikeouts you get. Duh. It follows, then, that if your K% doesn't really go well with your StS%, then chances are it's unsustainable.

Look at that point near the left, with the StS% of 4.6% and the K% of 18.03%. Seems out of place, right? Right. That's 2008 Mike Mussina, for whom nearly half of his strikeouts this year have been called. That's twice the league average. That strikes me as a giant red flag when it comes to discussing his future success, because chances are this isn't the sort of thing that's likely to continue. So where Mussina's raw strikeout rate may not hint at an imminent decline, his swinging strike rate is making some angry noises.

It works the other way, too. 2008 Scott Olsen has a K% of 13.23% despite a StS% of 9.9%. If you plug his StS% into the best-fit equation, you come out with a theoretical K% of 20.08%. That's a big giant difference. The biggest difference in the past four years, as it happens. Olsen's actually missed more bats in 2008 than he did in 2007, but his strikeout rate has taken a precipitous dive, which seems both unfair and unlikely to continue. The fact that his fastball is missing 3mph is a concern, but the fact that his strikeout rate has followed is not, I don't think. He's still missing bats at the same rate, and that should manifest itself in a similar number of strikeouts.

I don't mean to imply that this is all totally random, the way people talk about HR/FB or whatever. There does appear to be some element of pitcher control over how well their swinging strikes translate to strikeouts; Tim Hudson, for example, appears to be below-average, whereas guys like Josh Beckett, Erik Bedard, Mussina, and Matt Cain appear to be above-average. There could be any number of reasons for this to be so, but the bottom line is that some pitchers seem to be able to generate positive differences between their K% and tK% while others remain in the negatives. However, with that said, swinging strikes remain the best indicator of strikeout rate, so when you encounter a guy such as '08 Mussina or '08 Olsen whose two rates don't match up, be on the lookout. More than likely, something's about to give.