It is no secret that we think that Felix Hernandez throws too many fastballs. With tremendous off-speed pitches, Felix's fastball, especially his 4-seam, is possibly the worst pitch in his repertoire. This is understandably tough for a bull-headed young pitcher to comprehend because for most pitchers, they have had velocity velocity velocity drilled into their heads from a young age. It's velocity that gets you noticed by pro scouts when you are a measly teenager in Venezuela. The velocity on your fastball is what got you where you are and when you end up under the tutelage of noted fastball-fetishist Mel Stottlemyre, it makes it no easier to heed the advice of others.

So, much as Dave pleaded and actually got heard by Rafael Chaves who in turn was able to broach the subject with Felix, the task is largely going to fall to you Rick Adair, our new pitching coach. First off, Felix is throwing way too many fastballs. We hammered on this all throughout 2008, but just look at the jump in 2008. 66% fastballs last year, up from two seasons of 57%. During that same time span we saw Felix's overall swinging strike percentage drop from 9.7% to 8.6%, a troubling fall.

Here is what I find to be a nifty chart. I separated Felix's pitches into two categories: fastballs and non-fastballs. I then computed how often the pitch was swung at and missed and how often it was called a ball. 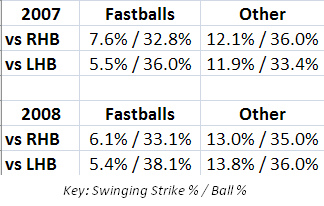 Felix threw more fastballs in 2008 and his ability to miss bats with them fell. He also lost some ability to throw them for strikes. That's a big double whammy. Meanwhile, look at how often Felix gets a missed bat when he throws an off speed pitch! And notice how he does not even need to go outside the zone any more often than he does with his fastball to accomplish that. If instead of saying "Fastball", the above chart said "Pitch X", wouldn't you be calling for Felix to stop throwing Pitch X?

Okay, so throwing the fastball too often (read: at all) is the first problem. The second problem, seeing as how I expect to Felix to go right ahead and continue to throw fastballs, is the location of those fastballs. I mentioned above the falling strike and missed bat rates from 2007 to 2008 on fastballs. Notably, Felix saw a big decline in throwing fastballs for strikes to left-handed batters and in throwing fastballs for a swinging strike to right-handed batters.

Tackling the lefties first, we saw visually see what happened by going back to my awesome heat maps. On the left is 2007, the right, 2008. 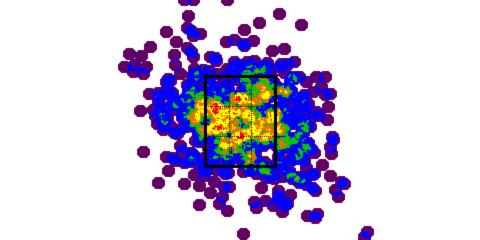 The up-and-in area that Felix went to with some regularity in 2007 is pretty much gone. Felix simply abandoned the idea of throwing fastballs inside to left-handers in 2008. Whereas in 2007 the distribution of location is fairly centralized, 2008 is obviously skewed, massing around the outer edge of the strike zone.

Moving on to right-handers, the heat maps again help illustrate the issue, spotting the potential cause for the drop in swinging strikes.

Look at the down and away corner (lower-right). That's the bread-and-butter area for pitchers and Felix used to set up shop there in 2007. Come 2008 and he is all over the place instead. Also compare the ratio of pitches landing in the upper third of the zone between the years and it becomes clear that Felix's fastball was elevated more in 2008. That's fine if you manage to get more missed bats that way (which is the general relationship between pitching up in the zone and strikeouts), but our chart above showed that not to be the case and instead all Felix ended up with is a nine-point drop in his ground ball rate.

Mr. Adair, Felix's fastball is holding him back and actually causing him to get worse at an age and experience level when he should be making a leap forward. You need to get it through to him that he was much better off when he was throwing it at 2006-7 frequency and locating it down in the zone. I do not think it is hyperbole to say that until Felix makes those changes, we will not see the Cy Young-caliber pitcher that he can be unless he magically learns to command his fastball like Greg Maddux.