The fifth in a non-alphabetical and irregularly updated series of review pieces for each(?) of the players we predicted last spring.

Healer of sick and slayer of evil, in 2008 Adrian Beltre put in yet another strong and underappreciated full season of work. He flew out of the gate with a scorching first month, almost singlehandedly keeping a bad lineup good enough to remain competitive, and while a lousy May pulled him back down to Earth, he was done in by a .156 BABIP that in no way reflected how well he was hitting the ball. Things started to even out over the rest of the summer, and although Raul Ibanez finished with the numbers, a convincing argument could be made that for much of the year Beltre was making the best contact on the team. And all the while he was doing it with a torn ligament in his thumb, an injury to which he finally succumbed in September so that he can be ready for spring training.

Playing through injuries is nothing new for this team. Much to my chagrin, it seems like half the guys have done it. But the difference is that, where the Silvas and Batistas and Ibanezes of the world either directly or indirectly used their injuries to explain away ineffectiveness, Beltre downplayed his pain and somehow managed to sustain around the same level of performance as before. The discomfort was obvious whenever he caught a line drive or got jammed by a pitch, but he never talked about it, and he never made excuses. He just went out there and played, celebrating his triumphs and accepting responsibility for his mistakes. If you're determined to play through an injury, this is the way to do it. Make sure it doesn't kill your performance, and then don't talk about it. If people play through pain to look tough and heroic, pointing it out all the time kind of negates the whole idea. In this sort of circumstance, the strongest leader is the silent one.

It wasn't just Beltre's offense that he managed to keep up despite the injury - for five and a half months, his defense was absolutely out of this world. And I mean that. Just look at what he did:

As of next April, he's in line to be the greatest Mariner once more. Or he might be ~tied with Ichiro and Felix. But the point remains. Beltre may not repeat as the +29 run UZR third basemen he was in 2008, but he's established a true talent somewhere between +10 < x < +20, and his offense should get a boost from a healthy left hand and a BABIP that improves on last year's .279. Put it all together and you've got a 3.5-4 WAR star player, a guy who'd be worth a good $17m or so on the open market. Adrian Beltre may not get his results in the most obvious way, but he still gets his results, and he's set to be a hell of a value, just as he's been for the last three years. Which answers the question of why we love him so much. We don't love him because he's funny, or because he has weird little ticks. We love him because he's one of the best baseball players this team has had in a good long time.

Unfortunately, that's exactly what puts him front and center this offseason. As maybe the best player on the team, Beltre stands as one of our most marketable assets, and when you're looking to rebuild an organization, desirable veterans with one year left under contract tend to be the first to go. And why wouldn't they? Veterans generally don't want to stick around and re-sign with a rebuilding franchise, so if they're going to leave down the road anyway, you might as well make them available, just to see. It only makes sense.

As painful as it is to think about, the front office needs to make a decision on Beltre, and they need to make it soon. Either they want him to be a part of this team's future or they don't. If they want him to stick around for the long run, they need to approach him, make their rebuliding intentions clear, and ask him if he'd be willing to re-sign. If he were to say yes, they'd need to start negotiating an extension before he has time to change his mind. If he were to say no (or maybe), they'd need to deal with it the same way they should if they didn't want him to stick around in the first place - make him available, take some offers, and pull the trigger on the best one if the return is better than whatever compensation picks they could get after the year. Because if Beltre doesn't want to re-sign with a project, it doesn't really do us that much good to keep him.

Assuming that we're getting ready to tear things down and start over, I can't imagine that Beltre has much interest in staying. He wants to win. He's only been in the playoffs once - for four games - and a player only has so many opportunities to pick a new team while he still has something left to contribute. So while I'm not going to draft my tearful goodbye just yet, I'm preparing myself. I expect to hear Beltre's name surface in a new rumor pretty much every morning. I expect to hear at some point that discussions are intensifying. And before too long I expect to hear that a deal went down. There're no guarantees, but given enough demand that there's a good enough return on the table, it seems like the best course of action for all parties involved. Including me. Even if it feels like someone ripping my heart through my ribs.

I guess I shouldn't get ahead of myself. As of this writing, Adrian Beltre's still a Mariner, and he's one of the best Mariners we've got. But because that may not last much longer, all I ask is that with every passing day, each and every one of you appreciates him. That each and every one of you appreciates the shit out of him. If only because somebody has to, and one man can't do it alone. No matter how fucking insane he might be. 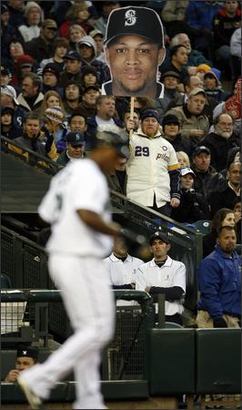