With the offseason about to begin in earnest, I thought it'd be a good idea to take a quick look at the roster and see how it shapes up so that we can get a better idea of our needs. So with that in mind, presented below is my best guess as to what the team (or at least, the regulars) would look like were this the group of players we took into 2009: 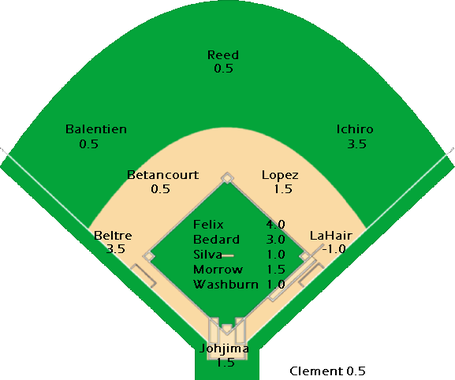 Listed below or beside each name is my estimate of the player's current Wins Above Replacement rating. It's not an exact science, and there were a few judgment calls, but I'm pretty comfortable with the overall picture. As far as LaHair at first is concerned, that's just a guess, and slotting in, say, Morse or Tuglett barely changes anything. So while you may have a few quibbles here and there, no little changes are going to make that significant a difference.

If you assume that we get an additional, I dunno, 1 WAR from the bench and 1-2 WAR from the bullpen, then this team, as constructed above, would be projected to win between 70-75 games. That's bad, and even if you plug in massive gains by Clement, Wlad, and Morrow, it's still a longshot to hit .500. There are just way too many weaknesses on the roster and in the system for this team to even think about competing next year without going outside the organization for some major help.

Major help that I don't think we're going to seek out. At least, not major help for the short-term. While GMZ has yet to show his hand, it's looking like, for the first time in my blogging career, the Mariners are going to set their sights on some time beyond the next season. For the first time in as long as I've been writing, the Mariners seem to have a plan. A plan more complicated and better thought out than "JESUS CHRIST PLAY FOR TODAY YOU MIGHT DIE TOMORROW". A big-picture plan. A plan intended to help us in the long run, even if it doesn't pay many short-term dividends.

While I'm not awaiting a formal announcement that the front office doesn't care about 2009, I think it's pretty clear that no one really expects to win next season. And that's...well, I think we could build a decent team for next year without making too many sacrifices, but I see where they're coming from, and I'm willing to give them the benefit of the doubt. They deserve it. It's just a weird situation in which to find myself, because I love thinking about good deals and bargains on the market, and this time there's not really a point. There are guys out there who could really help us, but so what? Them looking beyond 2009 kind of defeats the purpose of my imagining how to make this team a winner in 2009.

There are bargains out there to be had, and I'm sure the front office will look at them. They'd be stupid not to. But barring something unforeseen, they're not going to make a splash, and this team won't compete without a splash. It won't compete without a few splashes, really. Instead, first and foremost I imagine this offseason will be about trades. About seeing who's offering what for some of our veterans and taking the best offers to re-stock a system nearly bereft of high-level talent. We might have to say some difficult goodbyes, but that's just part of the process. Sometimes you have to trade a guy you love today in order to get a guy you might love tomorrow. That means Beltre. That means Putz. For a few of you, that means a couple other guys too. We just have to keep telling ourselves the whole time that it's all for the greater good. This offseason has the potential to be as exciting as it is nervous.

This is going to be a different winter. After all, it's not as easy to talk about possible trades as it is to talk about possible free agent signings. This is going to be a different winter, but if you can look past the gloomy connotations of the term "rebuilding", it has the potential to be our best in a long long time. Look at that roster posted above. There's some talent there, but there's not enough of it, and there's not enough on the way. This is an organization in need of an overhaul, and Armstrong and Lincoln aside, I don't know that we could've found many better people to lead it.

The Seattle Mariners need help. It's a team that could compete next year with a few handy additions, but if GMZ and his merry band of competents do indeed choose to overlook 2009 in favor of 2010 and 2012, then I'm going to trust that they're making the right call. While they could very easily shatter that trust in a heartbeat tomorrow, I trust them right now, and my god, does that ever feel good to say.