And The New GM Of The Seattle Mariners Is None Other Than Dr. Zoinks

Share All sharing options for: And The New GM Of The Seattle Mariners Is None Other Than Dr. Zoinks

I don't know that there's been an official announcement as of yet (edit: announcement!), but according to KJR, Jack Zduriencik has been hired as the team's new GM. He's coming over from Milwaukee, an organization that greatly benefited from his excellent work but that sadly didn't pay him enough to afford a mirror. 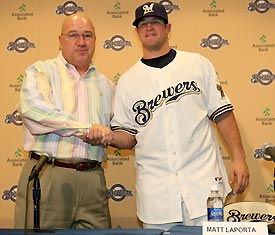 It's tempting to write this off as just the latest in a long string of old white guy hirings by the suits in charge, but while Zoinks is old, and white, and hired, he doesn't look like he sucks, which should set him apart from the previous regimes. It's almost impossible to overstate how much he's done for the Brewers over the years. That's a homegrown organization, and Zoinks has had a hand in acquiring a lot of that talent. He is one of the most important reasons why they are where they are today, and that kind of ability to hoard and develop good young players should serve the Mariners well as they look to rebuild.

Zoinks looks to be a terrific evaluator of talent, and I imagine he's a big proponent of developing from within. What he isn't is a brainy math kid with an Ivy League degree and a healthy contempt for having a normal circadian rhythm. It's easy to see why he did well in the interviews. He speaks Armstrong's language. You're not going to see him come in here and build his own DiamondView database, or talk everyone's ear off about the importance of replacement level or swinging strikes. That's not his thing. He's an old school guy - the most old school of the four finalists - and he takes an old school approach.

But he takes it successfully, which is what makes me okay with this decision. I'm not ecstatic. I'm content. Zoinks is a safe hire. Aside from presumably bringing in a bunch of his own guys to re-stock the scouting department, he's not going to rock the boat. He's not going to tell the executives "I'd like you guys more if you would just do everything differently than you do now." A lot of the thinking processes are probably still going to be the same. The information going into those processes is just going to be better, which should get this team going in the right direction. Which is really what we've all wanted for years. Bavasi could never do it. Zoinks, however, appears to be capable.

So it's done. We may not have the GM we've always dreamed of, but the one we have now is a hell of a lot closer than the one we had before, which is progress, no matter how you look at it. Progress. Finally, progress. Will it be enough? No way to say for now. I have some reservations about the Zoinks administration, and I won't be fully on board until it wows me. But this man makes us better, and if he's willing to listen to statistical arguments* and apply more modern principles to his Major League roster-building than the last guy, then the entire organization should be in pretty good shape going forward. The man knows talent. We don't have enough of it. It's a match made in necessity heaven.

Now to drop off my resume.